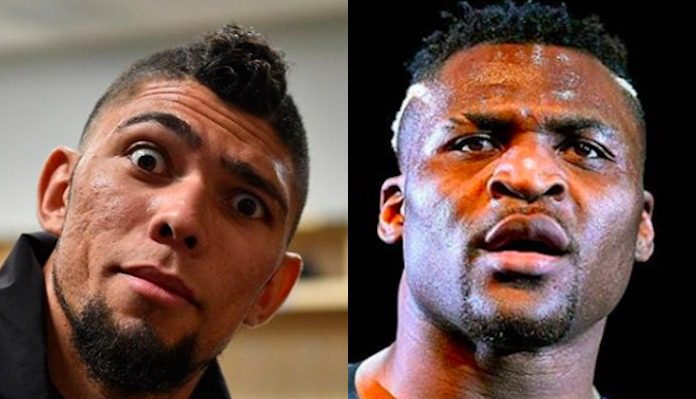 This list of people willing to fight Francis Ngannou is seemingly getting shorter and shorter. Having rebounded from two worrying losses with a trio of blitzkrieg knockouts of Curtis Blaydes, Cain Velasquez and Junior dos Santos, Ngannou has reasserted himself as the scariest fighter in MMA. Yet there is still one man ready and willing to step into the cage with the talented Cameroonian-Frenchman: Brazil’s Johnny Walker.

Walker, to remind, is not even a heavyweight, but a light heavyweight. Nonetheless, he is confident that if was locked in the cage with Francis Ngannou on this very day, he could win.

UFC: Mention a name capable of defeating this man today.

“Mention a name capable of defeating this man today,” read the UFC’s Instagram post, which featured a photo of Ngannou (translations via Guilherme Cruz of MMA Fighting).

While Johnny Walker would surely be a significant underdog in a prospective showdown with Francis Ngannou, he has certainly proven himself to be a force to be reckoned with as well. In fact, he’s currently on a streak not unlike Ngannou’s.

Since joining the UFC roster in November of 2018, the Brazilian light heavyweight has delivered jaw-dropping knockout victories over Khalil Rountree Jr, Justin Ledet and Misha Cirkunov — all in less than three minutes combined.

These latest victories have carried him to an impressive 17-3 overall record. Ngannou, meanwhile, is 14-3.

How do you think Johnny Walker would fair in a showdown with fearsome heavyweight contender Francis Ngannou? Could he pull of a win? Join the debate in the comments section below.