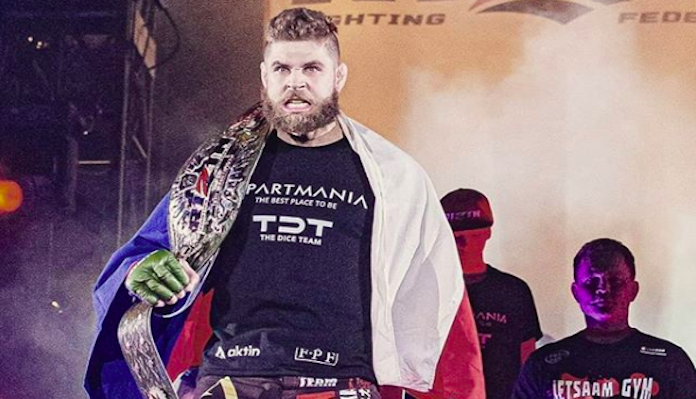 A light heavyweight bout between former RIZIN champion Jiri Prochazka and top contender Volkan Oezdemir has been added to the July 11 card on Fight Island.

As previously reported, the UFC has been targeting a fight between Prochazka and Oezdemir for several months now, but the coronavirus pandemic got in the way. With both men being international fighters, it was difficult for the UFC to book them to fight in the United States. But now, with Fight Island set to open in the next few weeks in Abu Dhabi, the UFC is able to now freely match up its international talent, and that includes these two.

According to ESPN’s Brett Okamoto, the UFC is now targeting Prochazka vs. Oezdemir to take place on July 11 at Fight Island. The event is tentatively scheduled to be called UFC 251 and air live on pay-per-view.

Oezdemir 12 KOs in 17 wins. Prochazka 23 KOs in 26 wins. If you want to familiarize yourself with Prochazka: https://t.co/jNdlbmVON5

Prochazka (26-3-1) is the reigning and defending RIZIN light heavyweight champion. The 27-year-old Czech Republic native is currently riding an 11-fight win streak and has defeated a notable number of names during that stretch. Some of his keys wins came against CB Dollaway, King Mo, Fabio Maldonado, Brandon Halsey and Vadim Nemkov as Prochazka has emerged as one of the sport’s top light heavyweights outside the UFC.

Oezdemir (17-4) is one of the top-10 light heavyweights on the UFC roster. The 30-year-old Switzerland native is 5-3 overall inside the UFC with key wins over Aleksandar Rakic, Ilir Latifi, Jimi Manuwa, Misha Cirkunov and Ovince Saint Preux. He fought Daniel Cormier for the UFC light heavyweight title back in 2018 but lost via stoppage. Still, he’s proven that he is one of the top light heavyweights in the UFC, and the perfect opponent for Prochazka to try and test his worth against for his UFC debut.

Who do you think wins, Jiri Prochazka or Volkan Oezdemir?