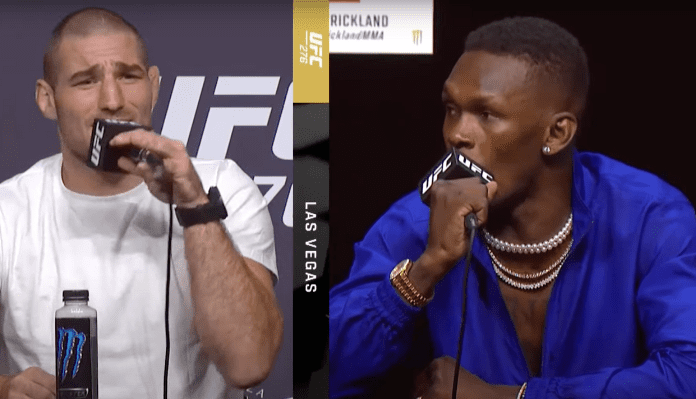 Strickland was facing Alex Pereira in a big fight for the middleweight division as the winner would likely get a title shot. In the lead-up to the fight, Strickland stole the show at media day and at the press conference as he took shots at Adesanya over his losses to Pereira.

According to Bareman, Strickland was a fight Adesanya wanted but unfortunately, Sean suffered a first-round KO loss.

“Sean Strickland fumbled the bag. Like yeah, I don’t know. Like, come on, man. That, I thought, was the fight. But he fumbled the bag,” Bareman said to Submission Radio about Strickland. “I don’t want to talk too much on their fight, but look, man, did he think he wasn’t fighting one of the best strikers in the world that can take you out if you stand in front of him?

“Like, your arrogance can get you in trouble. Yeah, I recognize when people come from another sport what they are and give them their due respect,” Bareman continued about Strickland. “He fumbled the bag. But all power to him. I hope he gets back in a position where Israel can fight him, because I know it’s a fight that Israel really wants. So all the best to Sean.”

Even though Sean Strickland lost to Alex Pereira, he still is a top-10 middleweight and will only need to string together a few wins and can get that shot at Israel Adesanya. If the fight does end up happening, it would be a big box office success as the two would trash-talk one another and given both are strikers it could be an exciting fight for the fans.

However, for now, Adesanya will need to get past Pereira next time out while Strickland’s next fight is uncertain.

Would you like to see Israel Adesanya vs. Sean Strickland in the future?