Home » MMA News » UFC » Holly Holm would KO Katie Taylor in what would be ... 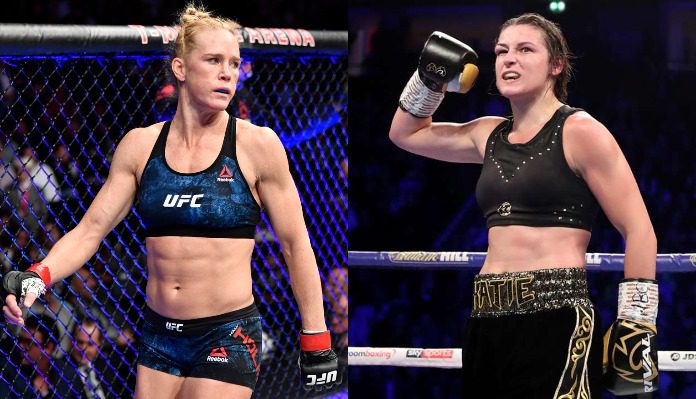 Mike Winkeljohn believes Holly Holm would have a ton of success should she get the chance to box Katie Taylor.

Recently, it was reported by an Irish outlet that Holm is the frontrunner to face Taylor next. It was originally expected that Taylor would have an immediate rematch with Amanda Serrano, but negotiations have stalled and now Holm, who has one fight left on her UFC deal, has been linked to the fight.

Before making the full-time move to MMA, Holm was a decorated boxer and a multiple-weight world champion. With that, Winkeljohn believes she would have a ton of success against Taylor should the fight happen.

“I know Holly wants to go back to boxing,” Winkeljohn said of Holm to BJPENN.com. “It’s never easy to transition back but Holly had world titles at 140, 147, and 154, nobody has ever done that before. Holly was the best of all time in boxing and now boxing at 135, she’s never been there before. I know Holly has power and would knockout Katie Taylor so it would be great. With that being said, it’s all about MMA right now.”

Although Holm would need the UFC to sign off on the fight, should it happen, Mike Winkeljohn believes it would be the biggest women’s boxing fight of all time. It would pair arguably the greatest female boxer of all time against one of the best ever in Holm and a former UFC champion as well.

“I think it would be a huge fight, gigantic, I think the biggest women’s boxing fight of all time,” Winkeljohn added of Holm-Taylor.

However, as of now, Mike Winkeljohn says Holly Holm is focused on MMA and getting her UFC title back. She’s coming off a controversial loss to Ketlen Vieira and the plan is to return in the summer and get back into the win column to earn another shot at the belt.

Would you want to watch Holly Holm vs. Katie Taylor in boxing?