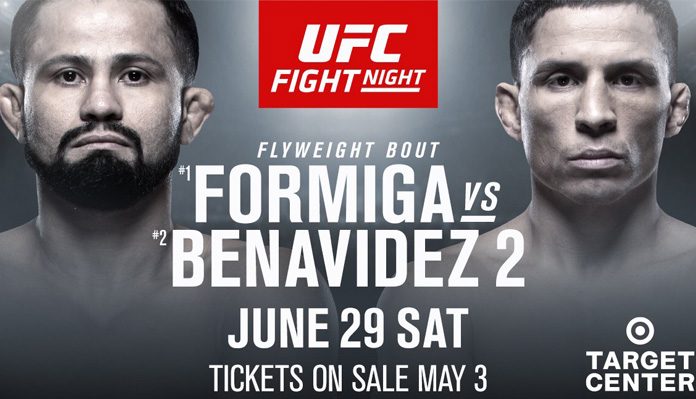 Joseph Benavidez didn’t get to face Henry Cejudo next but will get to face familiar foe instead. UFC officials confirmed Wednesday that former title challenger Benavidez will face Jussier Formiga at UFC Minneapolis on June 29.  These two first fought at UFC Fight Night 28 in Sept. 2013, with Benavidez earning a first-round TKO finish.

Benavidez (27-5) is coming off a unanimous decision win over Dustin Ortiz at UFC Brooklyn in January which gave him back-to-back wins for the first time since Dec. 2016. Prior to that, the Xtreme Couture product earned his first stoppage victory since Apr. 2014 when he finished Alex Perez in the first round via TKO. The two-time UFC title challenger has gone 8-1 in his last nine fights, including a split decision nod over current flyweight kingpin Henry Cejudo. Benavidez made his UFC debut in Mar. 2011 and holds wins over John Moraga, Tim Elliott and the aforementioned champ Cejudo.

Formiga (23-5) heads into this UFC Minneapolis rematch on a four-fight winning streak. In his last outing at UFC Nashville, the 33-year-old handed Deiveson Figueiredo his first career loss when he defeated the Brazilian fighter by unanimous decision. The Nova Uniao product has gone 8-2 since his initial encounter with Benavidez, including wins over Wilson Reis, Dustin Ortiz and Sergio Pettis.

Officials also announced three other bouts for the card, including a heavyweight tilt between TUF 28 standout Maurice Greene against Junior Albini and a lightweight matchup pitting Drew Dober against Marco Polo Reyes and Vinicius Moreira taking on Roman Doldze in a the 205-pound division.

UFC Minneapolis will go down inside the Target Center in Minneapolis on June 29. It will air on ESPN. Here’s an updated look at the card.