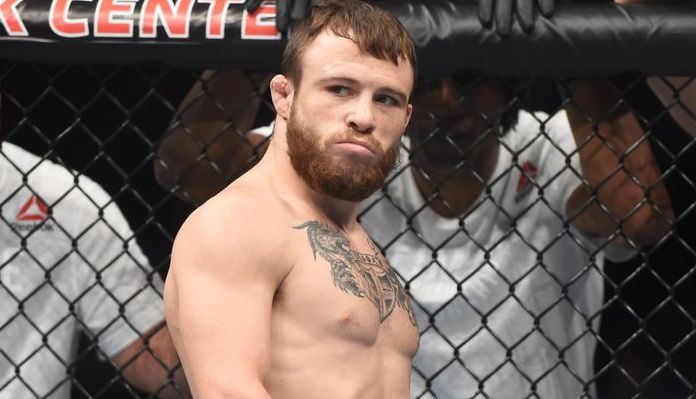 Jarred Brooks and many other UFC flyweights got the call today. That call would be that their services would no longer be needed in the UFC. The promotion is going about shutting down the division. It is a tough pill to swallow and now leaves about 25 fighters or so out of a job.

“Nobody called me from the UFC, they let my manager know,” Brooks told BJPENN.com when discussing the news, “I was just working out and actually, my coach called me. My coach and my manager are really tight, he said ‘yeah news is they are cutting the 125-pound division’ and Justin Scoggins and I were getting cut.”

News starting trickling down social media that many flyweights were out of a job, and just like that, so too was Brooks. He didn’t even get an option to move up to bantamweight either. Something he admits that he would have done, he just would have needed time to move up.

However, Brooks and many other flyweights are looking for a new home. And for Brooks, he already has an idea of where he hopes to go.

“I would love to be signed by ONE [Championship]. They also have a 115-pound division and a 125-pound division that I can fight in. I think I am the best strawweight that can fight DJ (Demetrious Johnson) in the future,” Brooks said, “I can be a champion in 115 and call Demetrious out if they want me to do it. I’d love to fight for ONE FC, that would be great, that is what I am hoping for. I think ONE FC is a good eye for me. I am open to other things but I am putting that name out there.”

“I think it is because the average American is 5’9” about 170-pounds. They don’t think little guys can do shit,” Brooks claimed, “Oh, it is just a bunch of b******s fighting each other, what is the quality in this? Okay, well you big motherf*****s come down and train with us and see what it is like. This is bad.”

It is indeed bad for all flyweights.

Many flyweights have been predicting this day would come, especially after the Johnson trade. Along with that, with so many flyweights being free agents, the market won’t be huge for them, either.

“A lot of them are going to be paid real sh*tty, too, in other organizations outside of the UFC. I even fought in Pancrase and they are one of the biggest organizations in the world and it wasn’t even that much money,” added Brooks, “I mean if you can go to ONE or Bellator, but in Bellator, those are higher weight classes, they don’t have a 125-pound division.”

Now, all Brooks can do is speculate why the UFC is cutting the division he once called home. A logical reason would be the fact that their biggest star in Johnson left, but that isn’t what Brooks thinks the reason is. Rather it has to do with the UFC’s new TV deal.

“I’ve been calling this for a minute. I think this is all linked to ESPN. It’s a conspiracy theory from me,” Brooks explained, “I have watched ESPN boxing and they always have the little guys on the really really undercard. They don’t show the little guys on ESPN or anything like that, as far as the main card. ESPN is taking over, so I’m thinking ESPN wanted nothing to do with the 125-pound division because they had problems with it in boxing.”

Ultimately, even though Brooks only fought in the UFC four times, it is a time he will never forget. For most fighters, fighting inside the Octagon is a dream come true.

“I felt like I was blessed fighting every time I went out there. I was in a pretty decent mood, getting free stuff, getting stuff catered to you. Yeah, fighting in the UFC was pretty great and it was a pretty good organization. I got to seek out and look for other organizations and other places in the world and keep on with my name. We are contractors, at the end of the day, UFC is just a name and Jarred Brooks is just a name. I’m going to market myself as high as the UFC.”

Even though today was bad, training resumes tomorrow while the hope is a deal can get done soon. In the end, it is just a roadblock in Brooks and other flyweights career, something that may turn out to help their careers.

“It’s not a big deal because this could be a process to where how many good performances the flyweights put on. I just think this is a performance break for the UFC,” Brooks said. “If not, I’ll venture off to different organizations and win titles in all of them. Then I’ll get big enough to fight at 135, and then I’ll go to the UFC or stay at a promotion that treats me well.”