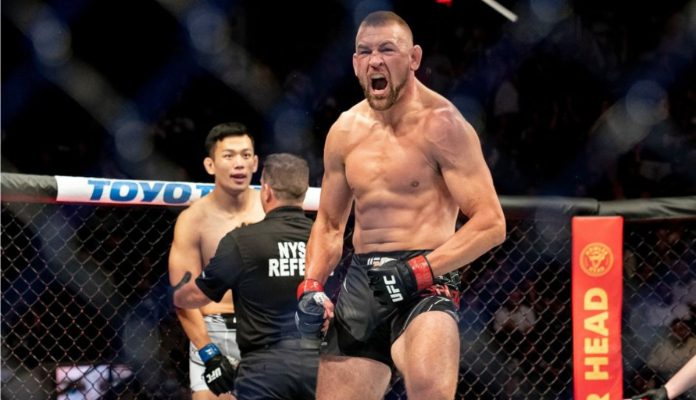 Jacoby entered the fight knowing it would be a tough test and the pressure was on him given the fact he was defending his spot in the rankings. He knew the fight would be tough but he landed a massive shot that dropped Jung and stopped the fight which Jacoby was pleased with.

“I hit him with my check hook and right there I saw his eyes kind of roll, so he was still there. But, that allowed me to realize I had to stay on him. When I hit him with that one-two, when he went down I saw his eyes he was done,” Jacoby said to BJPENN.com. “I turned around, in my mind, I thought if I walk off it’s for sure 50k because a walk-off KO is way cooler. I turned and I looked at my coach and he pointed so I turned real quick but right when I turned he took a wobble step. He was done like if I hit him anymore it was unnecessary damage but the same people complaining about the stoppage are the same people that complain the ref let it go too long.”

Given the fight only lasted 3:13 seconds, Jacoby believes that was one of the best performances of his career. He also thinks he sent a statement to the light heavyweight division that he is a real challenger.

“It was everything I could’ve hoped for as I was extremely prepared. I was more nervous than I was in the previous fights but I knew that would make me sharper,” Jacoby said. “It was one of the best performances of my career.”

After the event, Dustin Jacoby also found out he would be getting a $50K bonus, which was the first time he got a bonus in the UFC. Although UFC Long Island saw a ton of finishes, Jacoby was confident he would get the bonus.

“I was so pumped and the night before Dana said to us I’m sure you guys have seen Twitter and saw me handing out a lot of money so if you finish fights there is a good chance you get $50K,” Jacoby said. “He didn’t want to make any promises but told us to deliver and after he said that I thought if I got a finish I would get $50K which is what happened. It’s also my first bonus so I think this will open the floodgates and I can start rattling them off.”

The hope now for Dustin Jacoby is to return later this year and has his eyes on Volkan Oezemir. He hopes the Swiss native defeats Paul Craig on Saturday at UFC London to set the fight up. However, if Craig wins, Jacoby wants a top-10 opponent next.

“The fight that I would really like is Volkan Oezdemir. I think I match up really well with him, it’s a fan-friendly fight and I’m hoping he wins in London. If not, there are some great matchups but I would like someone in the top-10,” Jacoby said.

Would you like to see Dustin Jacoby vs. Volkan Oezdemir next?