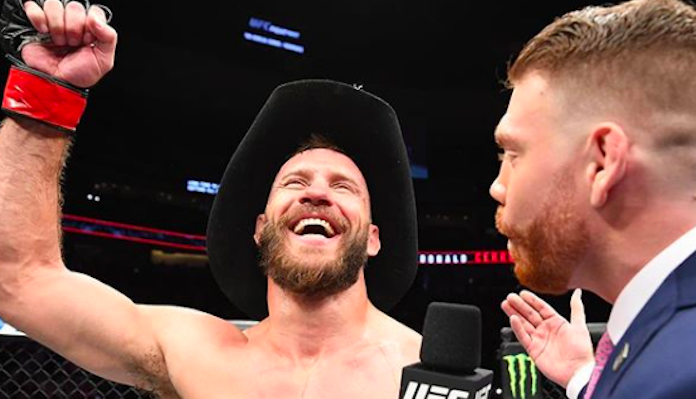 If Donald ‘Cowboy’ Cerrone could fight every weekend, he surely would.

But when it comes to landing big fights, it’s a process that can take more time than just jumping right back into the mix when asked to.

Cerrone has experienced this already once before with his first career title shot that came in his rematch with Rafael Dos Anjos in 2015.

Frequency was no problem at all for Cerrone prior to his title fight, but if he wanted to lock it down, he was going to have to slow down his activity which he did.

Still relatively active to this day despite now being 35 years of age, Cerrone has seemingly positioned himself up for the potential biggest fight of his career as speculation swirls that he and Conor McGregor could be each other’s next fight. Even Cerrone himself has already teased that the fight is on.

However, whether that’s the plan or not, it seems that a date for it still needs to be figured out according to some hinting from the Cowboy on Tuesday.

April 13 happens to be the pay-per-view event to follow next week’s UFC 235, which is UFC 236. The location for the event has yet to be determined but according to a recent report it’s looking like it will either be in New York City or Abu Dhabi. Although today ESPN’s Ariel Helwani and Kelvin Gastelum’s manager Ali Abdelaziz have suggested the possibility of Atlanta, Georgia.

July 6, on the other hand, happens to be the expected week of this year’s International Fight Week which would end with UFC 239 in Las Vegas.

Either date would work for a fight between Cerrone and McGregor as McGregor’s suspension from the UFC 229 post-fight brawl will have expired by the beginning of April.