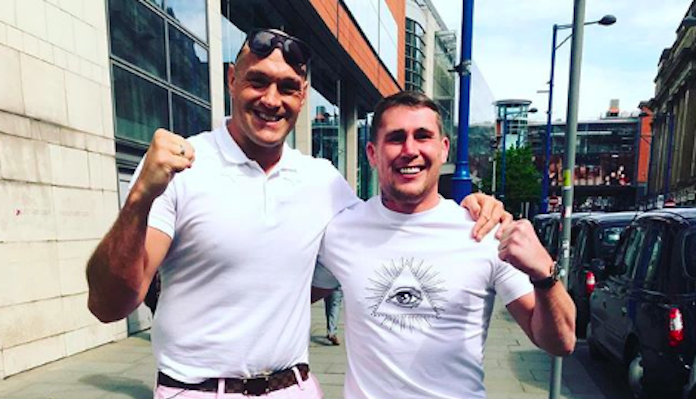 UFC welterweight contender Darren Till recently had the chance to meet one of his personal heroes in heavyweight boxing star Tyson Fury.

Till and Fury crossed paths in England and posed for a picture together, which the former shared on his Instagram page.

“The main fucking man,” Darren Till wrote about his meeting with the boxer. “Not many people I look up to in this world but [Tyson Fury] is deffo one of them! They’re all getting it!!!”

As Till explains it, he doesn’t look up to very many people in the world, but Fury makes the list.

As it turns out, the respect Till has for Fury is mutual. Fury also shared the photo on his Instagram, referring to the mixed martial artist as an “animal of the fight game.”

“Was great catching up with my man [Darren Till] today, gave me that Friday feeling meeting another animal of the fight game,” Tyson Fury wrote in his post.

Darren Till is currently on a two-fight skid, having recently lost to Tyron Woodley by submission and Jorge Masvidal by knockout — the first two setbacks of his professional mixed martial arts career. He does not currently have a fight booked, but recently offered to step in and replace the injured Woodley against Robbie Lawler in the UFC Minneapolis main event. His only request is that the fight occur at 175 pounds rather than 170.

Tyson Fury, meanwhile, is set to return to the ring on June 15, when he will take on Germany’s Tom Schwarz. While this bout is surely at the forefront of Fury’s mind at present, it pales in comparison to potential blockbusters with Deontay Wilder, who will attempt to kill Dominic Breazeale tonight, and Anthony Joshua, who fights on Anthony Ruiz June 1. With a little luck, Fury will fight one of these men sometime later this year.