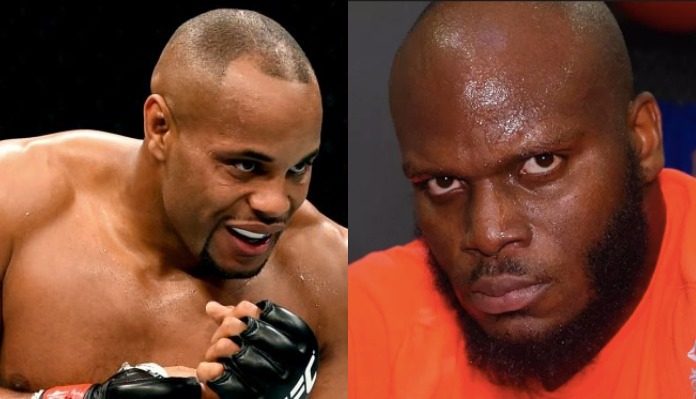 Derrick Lewis, who is set to battle Daniel Cormier for the UFC heavyweight title in the main event of UFC 230 this weekend, is beloved not just for his thunderous knockout wins but also for his hilarious personality. “The Black Beast” is always entertaining fans with his hilarious one-liners, his wild Instagram posts, and his lackadaisical approach to training for major bouts.

Apparently, however, Daniel Cormier doesn’t believe Derrick Lewis is 100% on the level. The heavyweight champion feels that Lewis probably trains much harder than he lets on. He also feels that, under Lewis’ jokey exterior, there is a much harder, more determined man.

“I believe he trains a lot harder than [he says],” Daniel Cormier said on The MMA Hour recently (transcript via MMA Fighting). “I believe he’s not really as hurt as he pretends to be when he’s against the side of the Octagon. Derrick is a little smarter than you guys think. But the problem is he’s smart in a way that you learn when you grow up in urban areas. He’s kind of got a little more street smarts. But I grew up in those same places. I can see through his facade.

“He’s not a dummy. This guy knows what he’s doing. He’s trying to trick us all, but don’t think that Derrick Lewis is some ignorant guy.”

“This is a guy that went to jail as a youth and honestly when you go to prison as a kid, especially a young black kid, a lot of people give up on you,” he said. “In that cell, you tell yourself a lot of things. You say, ‘I’m gonna do better when I get out.’ I’m gonna be this and I’m gonna be that. And the vast majority of the guys who do say those things, they never change. They go back and do the same thing. Derrick Lewis didn’t, right? Derrick Lewis became a millionaire. Derrick Lewis is fighting for the heavyweight championship of the world. There’s something different about him and that’s why I know what’s in front of me this weekend.

“So let him try and trick you guys. But pay very close attention to who he really is. He’s a smart guy and he ain’t tricking me,” he added.

“I know everything about everybody that I fight. I learn, I research them. They become my focus, they become my life for the time I’m training for them. I know everything about Derrick. And when learning about Derrick Lewis, I didn’t think, ‘Oh, this is gonna be an easier fight.’ All it made me believe was that it was gonna be tougher than people or the general public may believe. All it made me understand is that him knocking out Alexander Volkov wasn’t the exception — it was his expectation. Because he has fought from the very pits of hell and he scraped his way back up to who he is today. So him winning a fight with 15 seconds left, that doesn’t surprise me. This guy won the biggest fight in the world by doing and changing his life path.”