While O’Malley was told he would be next in line for a title shot, he now apparently has to wait until Henry Cejudo (16-2 MMA) returns from retirement to meet Aljamain Sterling (22-3 MMA) in a yet to be official fight. 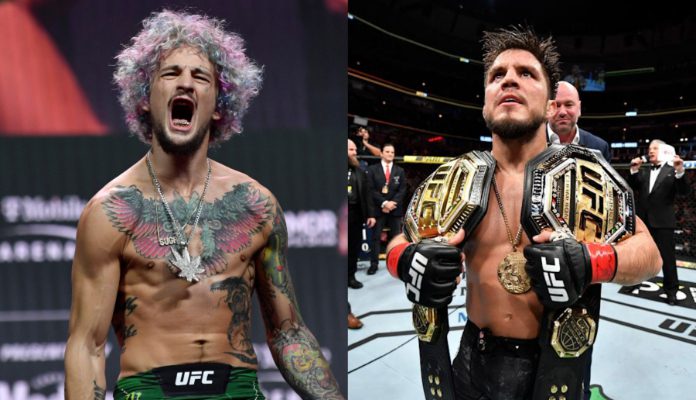 Announcing on his podcast earlier this month, Sterling said:

“I’m announcing that I am going to fight Henry next. We are targeting March. I will say Ali, brother, it’s done but it’s still not done until there’s ink on the paper but it’s done. But it’s still kind of not done but this is the fight that’s going to happen next.”

Whether O’Malley, 28, decides to wait it out for a title shot or whether he takes another fight in the interim, UFC commentator Daniel Cormier is telling ‘Sugar’ who he should avoid.

Daniel Cormier, speaking on his YouTube channel, had the following advice for Sean O’Malley (h/t MMAJunkie):

“There’s only one name I would steer clear of if I’m Sean O’Malley, and that’s Merab Dvalishvili. Because I believe that Merab and his pressure fighting style could present some matchup problems for O’Malley. Am I saying no he can’t win? Not at all. But I’m saying because of the wrestling, the pressure, you don’t want to be stuck in there with Merab. The dude’s a savage.”

Continuing Cormier told O’Malley to be careful in his decision making going forward:

“I get being frustrated. But, Sean O’Malley, do not allow for the frustration to lead to bad decisions. I think the fight with Merab, when on the verge of a title fight, could be a bad decision. Yeah, he can win. Absolutely. I think the kid is as good as anyone. No one could have told me that this kid from the Contender Series will become this. It’s been great to see, and I don’t know when Sean will fight for the title, but I do know that when he does, it’ll be a massive moment for the UFC.”

Do you agree with Seam Cormier that a Sean O’Malley vs Merab Dvalishvili (15-4 MMA) fight could be problematic for ‘Sugar’? Who would you like to see O’Malley fight next?

This article appeared first on BJPENN.COM
Previous articleBrandon Royval details “frustrating” end to 2022, expects to face Matheus Nicolau next: “It would be an interesting style to fight”
Next articleUFC legend Stephan Bonnar passes away at age 45
© Newspaper WordPress Theme by TagDiv