Dana White isn’t exactly sure what will come next for UFC Vegas 42 winner Max Holloway, but it won’t be a rematch with Conor McGregor.

Holloway returned to action in the headliner of today’s event in Las Vegas for a bout with perennial division contender Yair Rodriguez (13-3 MMA). The contest marked Max’s first since January, where he had earned a lopsided unanimous decision victory over Calvin Kattar.

Prior to the commencement of Saturday’s main event, Conor McGregor released a video where he was seen pacing back and forth while staring down Max Holloway on his television (see that here).

After ‘Blessed’ went on to defeat ‘El Pantera’ in what was a thrilling five-round war, the Hawaiian expressed interest in having a second fight with ‘Notorious’. 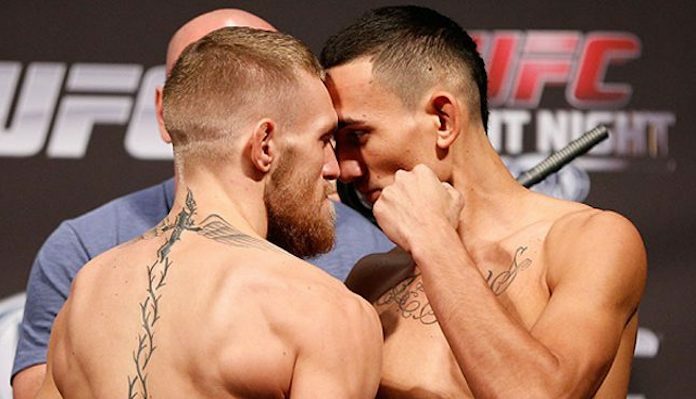 Conor McGregor (22-6 MMA) and Max Holloway (23-6 MMA) of course have a history. The pair met at featherweight way back in April of 2013, with ‘Notorious’ emerging victorious by way of unanimous decision.

Despite both McGregor and Holloway expressing interest in a potential rematch, UFC President Dana White called the idea “silly”.

“I don’t know what’s next for Max, but it does make sense to see him and Volkanovski again,” White said (via MMAJunkie). “Conor’s not even – Conor’s still hurt. To even talk about Conor is silly.”

“It’s one of those things – it was razor thin, (Holloway) just comes in and puts on a performance like this. This is just a guy that Volkanovski’s going to have to deal with, get him out of the way and do it again.”

Conor McGregor is of course still recovering after suffering a broken leg during his trilogy fight with Dustin Poirier at UFC 264.