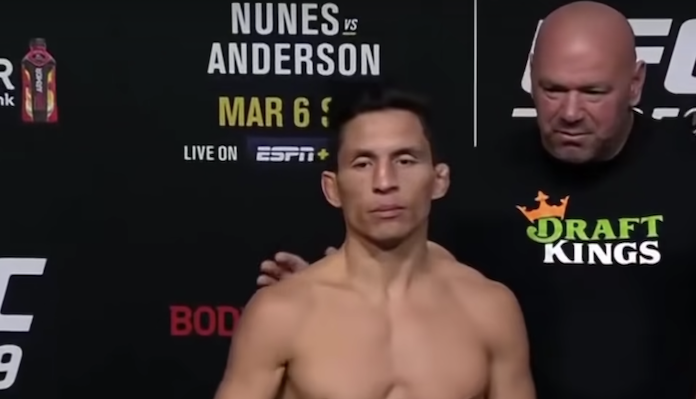 UFC president Dana White reacted after former flyweight title contender Joseph Benavidez announced that he has retired from the UFC.

Benavidez announced on Wednesday that he is stepping away from MMA. Now 37 years old, Benavidez lost his last three fights against Askar Askarov and Deiveson Figueiredo twice, and after taking so much damage in those fights, he decided that it’s time to walk away. As such, the Xtreme Couture-based product revealed that he is done with fighting.

Benavidez never was able to hold UFC gold, but he is arguably one of the greatest MMA fighters to never hold a belt. He went 15-6 overall in the UFC since joining the promotion a year ago, while competing in both the flyweight and bantamweight divisions. Going through Benavidez’s resume, it’s impressive. He has wins over the likes of Henry Cejudo, Ian McCall, Jussier Formiga, Rani Yahya, and Miguel Torres, to name a few. A member of the Zuffa family in the WEC since 2008, Benavidez put in over 13 years with the company.

With Benavidez now announcing that he’s done with fighting, his longtime boss, White, had nothing but positive things to say about his career. Speaking to ESPN, White praised Benavidez, calling him one of the greatest lighter-weighter fighters in the sport.

“Since joining WEC in 2008 and then UFC in 2011, he’s used his unstoppable pace and nasty guillotine to remain at the top of two divisions for 13 years. His epic battles with Dominick Cruz, Demetrious Johnson, and Henry Cejudo will never be forgotten. He was a constant professional and carried himself in a way that demanded respect from his peers,” White said, noting that Benavidez was “a pillar of the lighter-weight divisions for years.”

Do you think Dana White should induct Joseph Benavidez into the UFC Hall of Fame or honor his career in some other way?