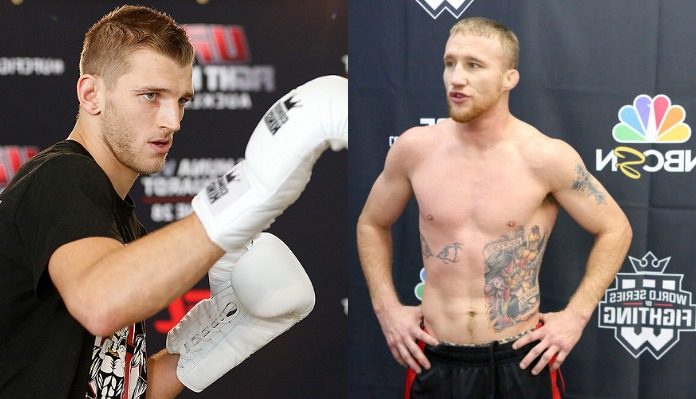 This weekend’s main event will be a big matchup between highly-ranked lightweights Dustin Poirier and Dan Hooker, and neither of them are underestimating the other.

Recently, UFC interim lightweight champion Justin Gaethje predicted that Poirier will “merk” Hooker in their fight, and now “The Hangman” has responded.

During an interview with Submission Radio, Hooker was asked about Gaethje’s comments and responded by saying if he knocks out Poirier, it’ll make Gaethje look bad. Back in 2018, Poirier handed Gaethje his second career loss when he defeated him by fourth-round TKO, and Hooker knows that beating the guy who beat Gaethje will only hurt the interim champion’s resume.

.@danthehangman isn't surprised about Justin Gaethje's prediction that Dustin Poirier would "merk" him: "If I go out there and I knock Dustin Poirier out, then it makes Gaethje kind of look like a bum. So, I guess he doesn’t want that" 🔥🔥🔥

“If someone knocks you out, you obviously want to see them doing well and see them succeed because it makes you look better. Like if I go in there and I knock Dustin Poirier out, it kind of makes Gaethje look like a bum, so I guess he doesn’t want that.”

With both Hooker and Poirier having a resume full of knockouts in their respective careers, Hooker acknowledges that the fight could go either way between him and “The Diamond” and understands why Gaethje said what he said.

“I think it’s a 50-50 fight, me and Poirier. I think there’s equal chance that he knocks me out or I knock him out, and I’m prepared for that kind of fight. Of course Gaethje is going to hedge his bets against a guy that flat-lined him.”

While Gaethje and others might be overlooking Hooker in the fight, Poirier recently spoke out saying he doesn’t like the disrespect being shown to his upcoming opponent, while Hooker questioned if Poirier’s chin is as strong as a recent opponent of his, Paul Felder.

There is certainly high stakes in the matchup between Hooker and Poirier as one makes a big statement in the highly-stacked lightweight division. Earlier this month it was announced that the UFC is targeting a unification lightweight title fight between Gaethje and reigning champion Khabib Nurmagomedov for UFC 253, although no announcement has been made official.

The winner of Hooker and Poirier is likely to firmly establish their place in the title conversation after the unification fight between both champions.

Who do you see winning the fight this weekend, Dan Hooker or Dustin Poirier?