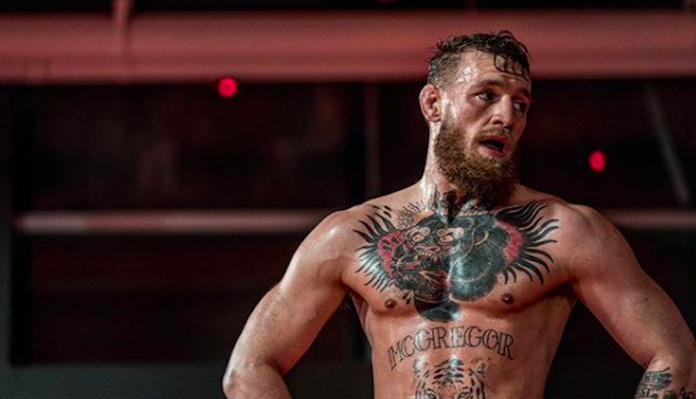 There’s recently been a lot of talk about the potential Octagon return of Conor McGregor. From the looks of it, that return will have to wait, as the Irish MMA star has sustained an arm injury.

McGregor announced this setback, which he implied is the result of ‘intense training and sparring sessions’ in a Friday afternoon post to his official Instagram account.

“Intense training and sparring sessions, I will always push it to the limits,” McGregor wrote in his post. This comes off and I push on! The Proper Don! Nothing will stop me.”

Prior to this injury, Conor McGregor did not have a fight booked, and was looking fairly short on options as most of the UFC’s top lightweights are currently indisposed.

That being said, former World Series of Fighting lightweight champion Justin Gaethje is currently without a dance partner, and recently called for a showdown with the Irishman.

“I’m ranked No. 5 right now,” he told ESPN, calling for a matchup with Conor McGregor. “There are four guys and the champion in front of me. I’m looking for one of those guys, and I’m looking for a big fight this summer. I don’t want to fight guys ranked behind me. I’ve got two knockouts in a row. James Vick was ranked behind me. I feel I deserve someone in front of me… Looking at the landscape, Conor McGregor is No. 3 right now. If it’s not him, there’s not an open fight right now. So, that’s the fight I want. He’s No. 3. If he’s not going to fight, take him out of the rankings. I’d be cool with that, too, and we can move on from there.”

McGregor was also recently called out by boxer Keith Thurman.

Whatever the case, he clearly has options when his arm is all healed up and he decides it’s time to return to action.