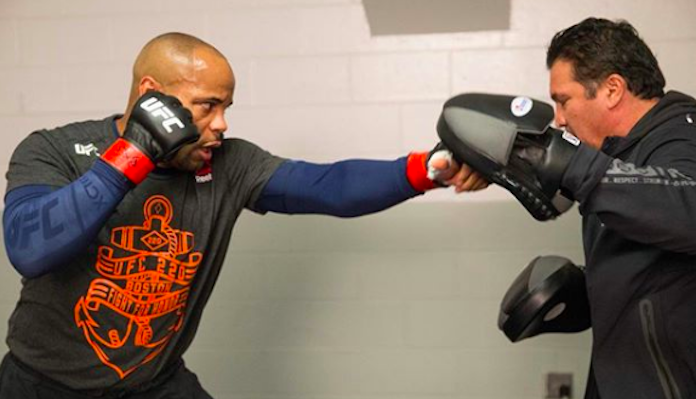 Head coach Javier Mendez anticipates a healthier Daniel Cormier to go to war with Stipe Miocic in the trilogy bout.

UFC heavyweight champion Miocic and Cormier are scheduled to collide a third time on Aug. 15. The title bout is set to headline UFC 252 in Las Vegas. Cormier insists that this will be the last bout of his pro MMA career win or lose.

Cormier scored a knockout victory over Miocic in their first encounter back in July 2018 to become a UFC “champ-champ.” Miocic regained the gold in Aug. 2019 with a TKO victory over “DC.”

Appearing on the Real Quick With Mike Swick podcast, Mendez discussed Cormier’s back being a hindrance in his second bout with Miocic.

“He just had back surgery and he wasn’t quite right the way he needed to be,” Javier Mendez said of Daniel Cormier’s last outing with Miocic. “And the kind of back surgery he had takes a little bit of time for the back and mobility to be there. So, last time we played catch-up. We had played catch-up on his back. But you know, in all fairness too, as fighters there’s always something going wrong, right? Something’s always not quite right. Sometimes you get a perfect camp, most of the time you don’t. Something happens, but then you got a perfect performance. So you gotta take that with a grain of salt.”

With that said, Mendez feels that Cormier’s back is fully healed and his fighter will be prepared for war on fight night.

“In DC’s case, this one he’ll have a great back,” Mendez said when discussing Daniel Cormier’s health going into the trilogy bout. “His back will be fantastic. He’s already showing that in his sparring and his grappling. But you know, we’re expecting a war because if you don’t expect a war with a great fighter like Stipe, you’re stupid. That guy is a champion for a reason. He’s got a few losses and he knows how to adjust. Look what he did with Ngannou, he adjusted. He saw the power of that guy and he adjusted really well. Stipe’s a great fighter and a great champion for a reason, so if we don’t adjust to what he has we’re in trouble.”

If Daniel Cormier can defeat Miocic on Aug. 15, he’ll walk away from MMA competition having been a two-time UFC heavyweight champion in addition to being a former light heavyweight titleholder and a former “champ-champ.”

Do you think Daniel Cormier’s trilogy bout with Stipe Miocic will live up to the hype?