Chael Sonnen says some fans don’t understand the Chimaev hype: “Make no mistake, Khamzat Chimaev is as good as advertised”

Chael Sonnen, while acknowledging some fans don’t understand the Khamzat Chimaev hype – he thinks the Swede is the real deal.

It was at UFC 273 this past Saturday, April 9th that Khamzat Chimaev (11-0 MMA) defeated Gilbert Burns (20-5 MMA) in the welterweight bout. Burns, fought Chimaev for three thrilling rounds, but came out on the losing end of a unanimous decision.

“Make no mistake. Chimaev is as good as advertised. Some of you in your mind didn’t understand what that meant. You thought there was a human being out there. This will never go away. The fan or the viewer will think that there’s somebody that’s so good that they can put them on their finger and spin them around like a basketball. That belief will never end. The reality is that person doesn’t exist. Chimaev was as good as advertised.” 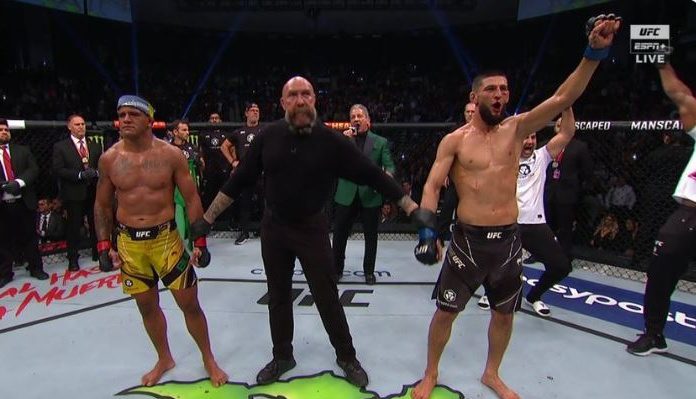 Continuing on speaking of the fight, Sonnen said:

“He’s (Khamzat Chimaev) never been to a 2nd round, he went all 3 tonight. Pushing the pace – all that conditioning was there. There was a visible size discrepancy between the two. I have a hard time with that as Gilbert is not a small 170 pounder and Chimaev is not a huge 170 pounder. How do you say one of them is bigger?”

“These rounds were so close, if there was a knockdown, Burns not only would have won the round, he would have won the fight. Khamzat has damn good hands, he had a damn good chin. He just took on the #2 ranked guy in the world and he won fair and square. It was a straight up brawl and Chamaev was bouncing around and enjoying it. Chimaev was as good as advertised.”

Do you agree with Chael Sonnen that Khamzat Chamaev is that good? Do you agree that ‘Borz’ should get a fight with Colby Covington next?

This article appeared first on BJPENN.COM
Previous articleKhamzat Chimaev on a potential fight with Colby Covington: “He’s a bit of a tough guy but not my level. I will go and knock him out”
Next articleMichael Bisping believes UFC 273 was a good learning experience for Khamzat Chimaev: “You can’t always just go out there and dominate people”
© Newspaper WordPress Theme by TagDiv