The Iranian fighter is fresh off his clash with Mateusz Gamrot at UFC 280 last month. The fight was an important one for Dariush, as he hadn’t competed since his win over Tony Ferguson last May. Despite the time away, he didn’t miss a beat.

At UFC 280, Kings MMA lightweight product dominated, winning by unanimous decision. With such a lengthy winning streak and his dominant win, one would expect Dariush to get a title shot. Unfortunately for him, that will not be the case.

Also on the pay-per-view, Islam Makhachev defeated Charles Oliveira to become the new lightweight champion. The Russian then called out featherweight titleholder Alexander Volkanovski for a fight in February. While the fight hasn’t been made official, ‘The Great’ seems up for the challenge.

Many fighters in Beneil Dariush’s shoes would wait for a title shot, but he has zero intention of doing so. In an interview with Morning Kombat, the lightweight contender made it clear he wants to be active, and not wait.

Instead, he would rather earn his crack at gold by defeating another top contender. In the interview, Dariush named Dustin Poirier, Michael Chandler, Charles Oliveira, and Rafael Fiziev as possible next opponents. 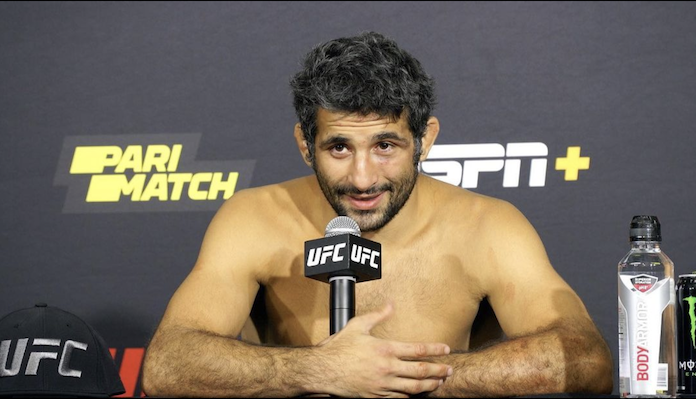 “I guess right now my options are the winner of Dustin Poirier [and Michael Chandler], Charles [Oliveira], or [Rafael] Fiziev,” Dariush said.  “Those are the three options.… Those are great fights, so let’s just figure this out and move forward.” (h/t MMA Junkie)

“I don’t want to sit out for another eight months, nine months, 1.5 years,” he said. “I love fighting. I just want to fight. You’re not gonna be able to dangle the belt in front of me. The belt doesn’t make me feel special.”

“I know who I am, I know what I’m worth, and I know what God has put me on this Earth to do,” Dariush continued. “So, the belt is cool, I’d love to get it, but ideally, I just want to make sure I don’t waste my talents, so I want to get back in there as soon as I can.”

This article appeared first on BJPENN.COM
Previous articleBrendan Schaub hits back at Anthony Smith over calling fans to boycott Jake Paul’s boxing matches: “That’s silly”
Next articleChael Sonnen believes Jon Jones has miscalculated his return by not creating storyline in time away from the UFC: “Nothing has changed in three years”
© Newspaper WordPress Theme by TagDiv