Anthony Smith says he is disappointed in T.J. Dillashaw as a person following UFC 280.

Last Saturday, October 22nd, saw T.J. Dillashaw (18-5 MMA) meet Aljamain Sterling (22-3 MMA) in the co-main bantamweight fight in the Octagon. It was a second round TKO which saw Sterling successfully retain the title at the Etihad Arena in Abu Dhabi. In the process Sterling broke the UFC bantamweight record for the longest winning streak.

Following the fight, ‘Killashaw’, 36, disclosed that he entered the match suffering from a shoulder injury. Speaking with Daniel Cormier in a post-fight interview Dillashaw advised he’s been dealing with the injury for nearly half a year saying:

“I gotta apologize to the weight class. Kind of held it up. I completely blew my shoulder out at the end of April, as soon as I was getting ready for this (fight). I probably dislocated it a good 20 times throughout training camp.”

“I told the ref in the back before we came out that most likely, the shoulder’s gonna pop out. If it does, I’ll get it back in, please do not stop it. Unfortunately, in the second round, I couldn’t push off my shoulder.” 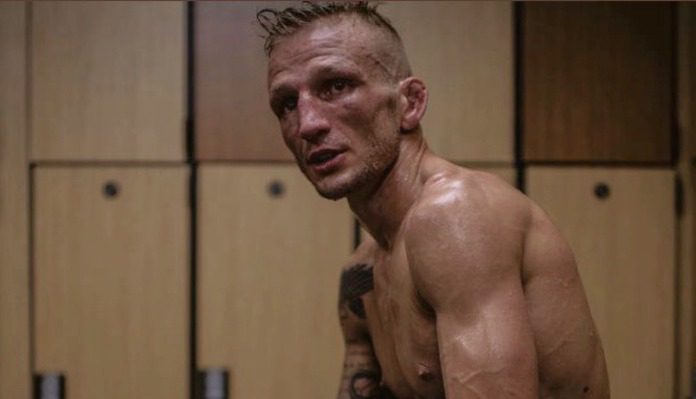 Concluding and apologizing once again to his weight class, Dillashaw said:

“This was a tough one to come into. Again, I apologize to the weight class ‘cause it’s a stacked weight class. I took up a position but I wasn’t gonna wait another year to get a shot.”

The UFC light heavyweight contender, Anthony Smith (36-17 MMA), has shared his thoughts on TJ Dillashaw trying to fight through a pre-known shoulder injury.

It was during a recent episode of the ‘Believe You Me’ podcast that Anthony Smith, speaking with Michael Bisping, offered his views on what transpired at UFC 280 saying (h/t MMANews):

“I’ll be honest with you, I’m a little bit disappointed in TJ Dillashaw as a person. He sold us all wolf tickets and had everyone super excited for a fight that — I don’t care what anybody says, you can’t lie to yourself. In all your fight buildup and all the stuff you said to other people, you had to look at yourself in the face in the mirror and know what you’re capable of, and what the chances were that that was going to happen.”

‘Lionheart’, who is currently rated #5 at 205 pounds is obviously disappointed in the man (Dillashaw) that he would promote and enter such a fight, knowing had no chance for a win.

Do you agree with Smith that Dillashaw should not have entered into the fight injured?

This article appeared first on BJPENN.COM
Previous articleDana White confirms that Conor McGregor will require 6 months of USADA drug testing before returning to the Octagon
Next articleJoe Rogan praises Sean O’Malley’s performance at UFC 280, but feels he didn’t win: “I thought Petr Yan won at the end of it”
© Newspaper WordPress Theme by TagDiv