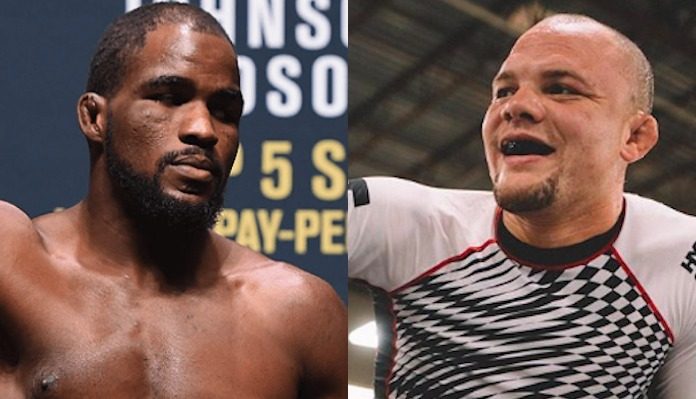 Anthony Smith is eager to work his way to a second title fight with light heavyweight champion Jon Jones. He believes that in order to do so, he’ll first have to defeat one of the division’s other top fighters — namely Dominick Reyes, Jan Blachowicz and Corey Anderson.

By his estimation, he’s most likely to be matched up with Corey Anderson, and from the sounds of it, he has no problem with that.

In fact, he relishes the chance to knock the wrestling specialist out.

Corey Anderson actually recently called out Anthony Smith. Smith isn’t sure why Anderson has beef with him, but is happy to settle it in the cage.

“He’s just mad. He’s just always talking sh*t,” Smith said. “He’s like trying to take a page out of Luke Rockhold’s book. I haven’t done anything to Corey expect for clean up his f*cking mess.

“They offered me a fight with Corey Anderson in Lincoln, Nebraska. He turned it down because he wasn’t ready. Then not long after that, I took a fight with Shogun, who they offered to him first and he turned it down, so then I took it because he wouldn’t. Then Glover Teixeira needed an opponent like a week later, and he takes that fight. So, he turns down me, he turns down Shogun, and then takes Glover because that’s a fight that in his head he feels he can win. He won’t take a fight with anybody that he’s not 100 percent sure he can beat. So, he goes in against a guy who’s known to be taken down and held there, and wins the fight and wants to talk sh*t like he’s the best in the world.

“Alright, fine. Whatever, not a big deal. Then I didn’t hear anything from Corey. So, because we’re in the god damn locker room and he’s feeling really god damn stupid because he knows that I know all that stuff, so he won’t even look at me. So, then they offer him the Gus fight after I fight Jon Jones, and he won’t take it. So, then I take it, and he tries to go back and say, ‘No, no, no, no, I’ll take it now, I’ll take it now’. I was like, it’s too late, I already signed it, you idiot. Here I am cleaning up your god damn mess again. Like, fine. So, from now on I hope they offer Corey Anderson the title shot, because it means I’ll probably end up with it.”

Anthony Smith concluded by taking a shot at Corey Anderson’s fighting style, which he doesn’t view as particularly fan-friendly.

“Again, it’s another dude that I’ve never done anything to,” Smith said. “Like, he’s just mad because you’ve been in the division for how many years, and haven’t even sniffed a title shot, and then guys like me and Thiago and have three fights and get one. There’s a reason. It’s not because we sell anymore tickets than you, it’s not because we’re ‘better than you’. We just go out there and we put it on the line and we take fights when they’re offered.

“Like, I’m not saying be a company guy and suck Dana’s d*ck or anything, but be a god damn fighter. And if you have a style that’s kind of dependent on winning decisions, then just count on winning a hell lot more of them, cause that’s just how the game goes. No one wants to watch you f*cking dry hump someone’s leg for 15 minutes, unless they’re a big Jiu Jitsu fan. No one wants to see it. And I’m a Jiu Jitsu guy at heart, so I just don’t know what it is about me that rubs some of these guys the wrong way.”

Suffice it to say that there seems to be a growing beef between Anthony Smith and Corey Anderson, and given their respective stations in the light heavyweight division, this might just be the fight to make.

Who do you think wins?