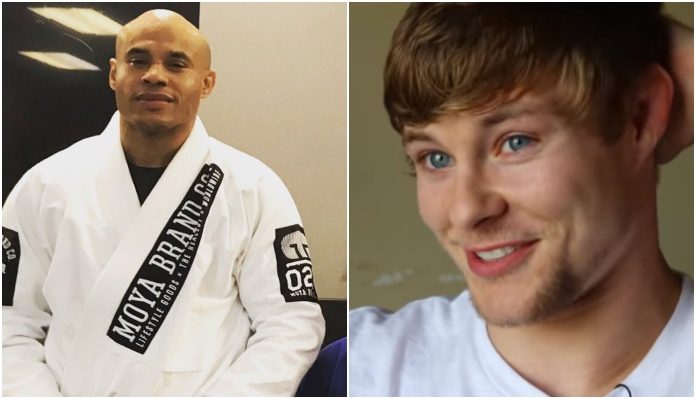 One of The Ultimate Fighter season 27 contestants at featherweight was Arkansas’ Bryce Mitchell.

Mitchell would end up tasting defeat in his bracket’s semi-final round as he was submitted by eventual winner, Brad Katona.

Still getting a shot at the UFC in the finale, Mitchell would take on and defeat fellow Team Cormier teammate Tyler Diamond by majority decision. Following the win is when the wacky squirrel eating featherweight’s career would start getting back on the weird side.

In August 2018, Mitchell suffered a gruesome injury to his groin in an accident involving a drill…

However, several months later now and Mitchell says he’s ready to return to action and that his ‘nuts are 100 percent’. Which, is always terrific news.

But to make his young career all the weirder, his announcement led to him being challenged to a grappling match by top MMA manager Ali Abdelaziz who would like to see Mitchell matched with one of his fighters in Dan Ige.

“You blood, I know somebody who can give you a nice southern ass whooping and his name is Daniel @Dynamitedan808 and you might actually get a blue after the fight. Have your people call @seanshelby” Abdelaziz tweeted at Mitchell.

Abdelaziz’ callout thus prompted Mitchell to fire back asking why doesn’t he whoop Abdelaziz’ ass instead. Which is where the challenge followed.

“I’ll make you a deal young man I’ll fly you to Vegas we’ll do 10 grappling round and if I don’t finish you I’ll give you 10k cash but if I finish you, you have to fight @Dynamitedan808 or we can spar but you have to sign the waiver. I’ll follow you DM me” Abdelaziz responded.

As a person who downplayed a gnarly injury to his ‘nutsack’, it’s no surprise that Mitchell is open to take on Abdelaziz in the grappling match as well as Ige.

Now it’s just a matter of seeing how serious all participants are.

Win or lose against you in a grappling match, as soon as I get an offer to fight @Dynamitedan808 it will be accepted. No prob, you got my word. Deal?@Abraham_kawa @matt_frm” Mitchell said.