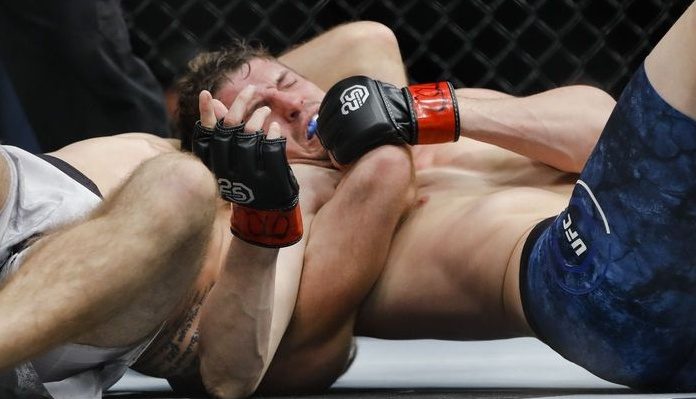 UFC Denver provided us with some truly epic moments for the UFC’s 25th-anniversary show. However, it didn’t come without some controversy as well.

Aside from some very questionable scorecards early on in the night, we wound up with a potentially unnecessary stoppage involving featherweights Chas Skelly and Bobby Moffett.

As Moffett was attacking with a d’arce choke, the referee intervened without a tap from Skelly and he was seen to still be conscious immediately after the choke was released. In the end, Moffett was awarded a TKO victory in his UFC debut.

Due to the controversy, Skelly would like to appeal the decision to try and get it overturned to a no contest. Something that rarely ever works out in fighters’ favors.

However, Skelly plans to just forget about it if he can’t guarantee that Moffett will get to keep his win bonus as he told The MMA Hour.

“Hopefully, we get to run it back. But, I don’t care to get it turned to a no-contest if they’re going to take [Moffett’s] win bonus. I’m not taking money out of anybody’s pocket. Just turning an ‘L’ into a ‘W’ doesn’t matter to me. But, if they do let him keep his money and it gets me a better chance at getting a rematch and the commission says it’s a no contest, then I’d like to appeal [the loss].

I want the rematch. But, if they just tell me I’ll get the rematch without a no contest, I don’t really care. What’s it mean to me? It’s just a ‘W’ or an ‘L’ on a sheet of paper. I don’t give a sh*t about that. The damage has already been done. What I care about is getting paid.”

In regards to the stoppage itself, Skelly continued to make his case as to why the referee made the wrong call.

“I wasn’t out at all,” Skelly continued, “I felt like I was past the hardest part of the choke. I was relaxed and it was just a matter of time before I was getting out of there. He (the referee) didn’t do a test at all. When he grabbed my arm, he came in to stop the fight. He wasn’t checking to see if I was conscious or unconscious. He was stopping the fight. I was relaxed there at that point. When you’re watching it, of course, I’m relaxed. I’m not tensed up. So he grabs my arm and shakes it, of course, my arm is going to shake. What do you want from me? I was relaxed.”

The loss makes it two in a row for the Texas native after a TKO loss to Jason Knight in May 2017.