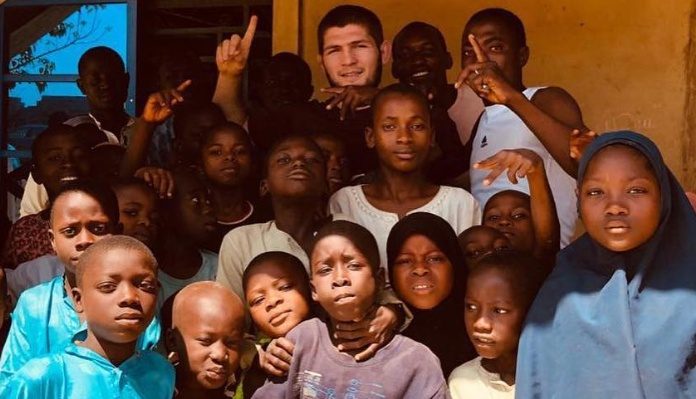 UFC lightweight champion of the world, Khabib Nurmagomedov is a man on a mission. But this time, that mission has nothing to do with cage fighting.

Life after the biggest win of his career at UFC 229 hasn’t seemed to have been all too bad for the undefeated champion despite the controversies that immediately followed.

From a welcome home parade to even getting to meet his country’s president, Nurmagomedov has been enjoying his victory. But now it’s time to change his focus onto others rather than himself.

Nurmagomedov is currently in Abuja, Nigeria as part of a charity mission to help build medical centers and repair water wells for the people.

UFC lightweight champion Khabib Nurmagomedov is currently in Nigeria on a charity mission. Main objectives are to repair water wells and build new medical centers. Here’s a photo his team sent me of Khabib with some local kids earlier today and a video of one of the broken wells they are planning on repairing and improving.

In Nurmagomedov’s last time out he successfully defended his lightweight title for the very first time by defeating the returning former champion, Conor McGregor via fourth-round submission (neck crank).

It was the end to a very intense and heated rivalry which was evident as the animosity between each side spilled over after the bout’s conclusion. And that’s meant figuratively and literally…

Due to Nurmagomedov’s jumping out of the cage to go after McGregor’s cornerman Dillon Danis, a brawl of sorts between the two camps would ensue in and out of the cage.

As a result, both McGregor and Nurmagomedov are expected to be receiving punishments such as fines and suspensions on December 10. The same is expected for Danis and Nurmagomedov’s teammate Zubaira Tukhugov.

Despite this, Nurmagomedov’s next bout is reportedly in the works against Georges St-Pierre.