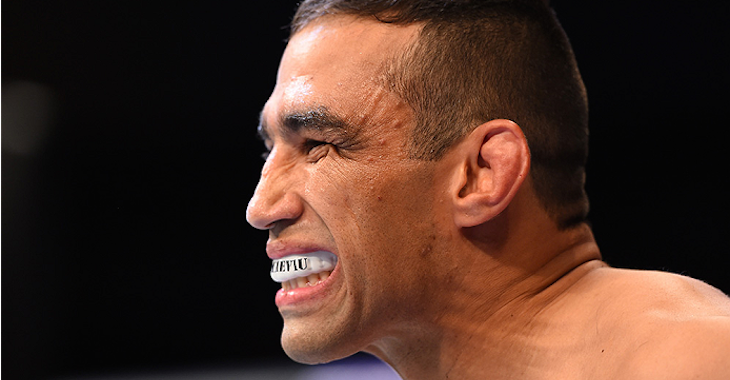 Round one begins and Tybura and Werdum exchange low kicks early. Marcin steps in with a left hand. Werdum counters with a left of his own followed by a head kick which is blocked. Werdum presses forward with a flurry. Tybura avoids and circles out. Werdum lands a nice uppercut followed by a right hand. He attempts a head kick but Marcin is able to block the strike. Tybura is covering up well but not getting off much. He lands a low kick followed by a shot to the body of Werdum. Fabricio steps in with a knee. He misses with a front kick. Tybura with a nice overhand right. Werdum replies with a straight right. Fabricio shoots in for a takedown. He doesn’t get it but is able to take the back of Tybura while standing. Werdum works in some knees. He looks to score a trip takedown. He can’t get it. Werdum loses the position and round one comes to an end.

Round two begins and Werdum lands a nice right hand followed by a low kick. Tybura returns fire with a head kick that misses the mark. Marcin with a nice low kick. Werdum replies with a straight left. Fabricio attempts a flying knee that misses the mark. He lands another good low kick. Tybura returns fire with one of his own. Marcin with a left hook. Werdum leaps in with a right hand. He follows that up with an outside leg kick. Tybura with a nice head kick. Werdum eats it and then lands a jab. This is a close fight. Tybura is able to score with a front kick. Werdum circles and then throws a high kick that misses the mark. Fabricio attempts to pressure Tybura against the cage but Marcin circles off. Werdum with a nice low kick. Tybura responds with a nice kick of his own. He misses with a follow up kick to the body. Tyrbura with some nice dirty boxing as the fighters engage in the clinch. They break. Werdum lands a left hand. He eats another chopping kick from Tybura. Werdum misses with a spinning roundhouse kick. The lands a right hand followed by a high kick. Tybura seems to be ok. He fires back a right hand. Round two comes to an end.

Round three begins and Werdum fires off a combination. He lands a front kick to the body. Tybura circles and then fires off a low kick. Werdum comes forward and lands a knee. He follows that up with a head kick. Tybura replies with a head kick of his own. Werdum is the aggressor now. He lands a push kick and then misses with a knee. Tybura with another head kick. It is blocked. He lands a left. Werdum with a nice knee to the body. Another left lands for Marcin. Werdum leaps in with a knee but it misses the mark. Tybura connects with a hard low kick. Werdum catches him with a left jab. He lands a right hook and then a knee. Another jab from Werdum. He seems to have found his range. Werdum misses with a spinning back fist. Tybura with a leg kick. Werdum with a left and then a knee. Fabricio with two big knees. Werdum has him pressed against the fence. Round three comes to an end.

Round four begins and Tybura lands a low kick. Werdum presses forward and connects with a left. Tybura has a chin. Werdum with a jab. Tybura answers with a hard low kick. Fabricio replies with one of his own. He shoots in for a single leg and gets it. Marcin immediately gets back up. Werdum has him pressed against the cage. Tybura breaks free. He avoids a head kick but then eats a knee from Fabricio. Werdum pressing the action now. He scores another knee and then lands a takedown. Werdum immediately moves to half guard. He lands a big elbow and then another. Werdum is looking to pass to mount. Only one minute remains in round four. Tybura is able to scramble and get back to his feet. They heavyweights exchange shots in the clinch. Tybura dives for a takedown. Werdum locks in a guillotine. The horn sounds to end round four.

Round five begins and Tybura presses forward with a combination. Werdum counters with a hard low kick. Tybura with a big head kick that is partially blocked. That appears to have rocked Fabricio. Werdum circles out and appears to be ok. He lands a jab. Marcin returns fire with a low kick. Werdum with a big high kick that lands. Tybura eats it and then answers with a right hand. Marcin with another head kick attempt. Werdum avoids and then presses forward with punches. Two minutes remain in the fight. Werdum with a double jab. Marcin responds with a left hook. Werdum circles and then comes forward with a right hand that misses the mark. One minute remains. Tybura lands a kic to the body. Werdum lands a beautiful combination. He follows that up with a kick. Tybura circles out and then comes forward with a left hook. He lands a low kick. Werdum charges in but misses with both a right hand and a low kick. The fighters stand and trade to close out the fight.