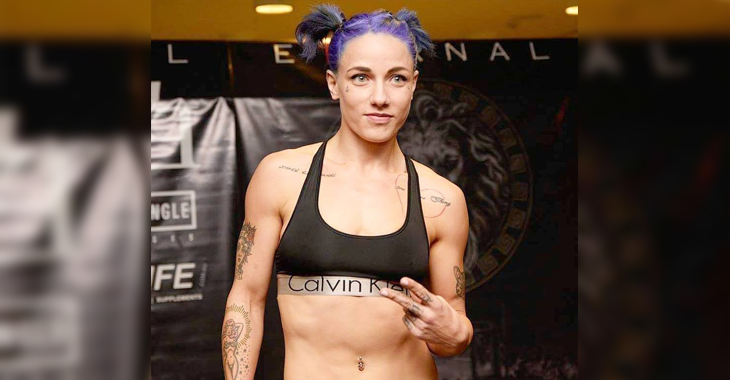 Round one begins and Rawlings comes out quickly. Clark gets her to retreat by throwing a flurry. Clark with a left hand and then a low kick. Rawlings come forward with a right hand. She charges in with a flurry but nothing lands. Clark with a nice outside low kick. Rawlings catches a second kick and takes Clark to the floor. Bec is working from full guard. Bec with some nice right hands. Clark scrambles and winds up in top position. That was some nice work from Jessica-Rose. Clark is able to pass to half guard. She is looking to pass to side control but Bec won’t allow it and Clark opts to stand up. Bec gets back to her feet and lands a punch. Clark circles and lands a left. A nice right hand over the top by Jessica-Rose. Rawlings eats the strikes and presses forward. Another ncie right hand and then a counter left from Clark. Another good combination from Clark. She follows that up with a low kick. Bec charges forward with punches. Round one comes to an end.

Round two begins and Bec Rawlings starts off quickly. She is utlizing a lot of pressure to begin round two. She throws a flurry of punches and then presses Clark against the cage. Bec is looking for double underhooks. Clark switches the position. She works in a nice knee. Bec scrambles and is able to press Clark back against the cage. Jessica-Rose is not having that and qucikly breaks free. Clark with a nice knee to the body. She just misses with a right hand. Bec with a combo but then eats a heavy low kick. Clark with a right hand that hurts Rawlings. She presses her against the cage and then drags her to the canvas. Clark attempts to take the back of Rawlings but winds up on top. She is looking to lock in a submission. She gives up on the hold and drops down a brutal elbow. SHe is in full mount now. Only seconds remain. Clark with another elbow and then another. The horn sounds to end round two.

Round three begins and both women meet in the center of the octagon and start throwing leather. Clark with a nice left hook. She lands a brtual outside low kick. Another hard low kick from Clark. Bec leaps in with a right hand but is countered with a left hook from Jessica-Rose. Clark with a right hand over the top. She circles out and then lands a left hook. Bec charges in with a nice 1-2. She is applying pressure but then eats with a right hand. Clark goes to the body with a hard kick. Rawlings fires back with one of her own. Clark is the agressor now. She lands a left hand and then a low kick. Both women connect with rights. Bec with a good straight punch, Clark replies with a knee. Two minutes remain. Rawlings lands a big right hand that appears to stun Clark. Jessica-Rose presses Bec against the cage. Rawlings switches the position. Bec scores a takedown. She is working from half guard here. Clark is pressed up against the cage. Clark gets back to her feet and reverses the positioning. She lands a nice knee and then drags Bec to the floor. Clark is working from half guard now. She lands a shoulder strike. Clark with some right hands followed by an elbow. The horns sounds to end round three.