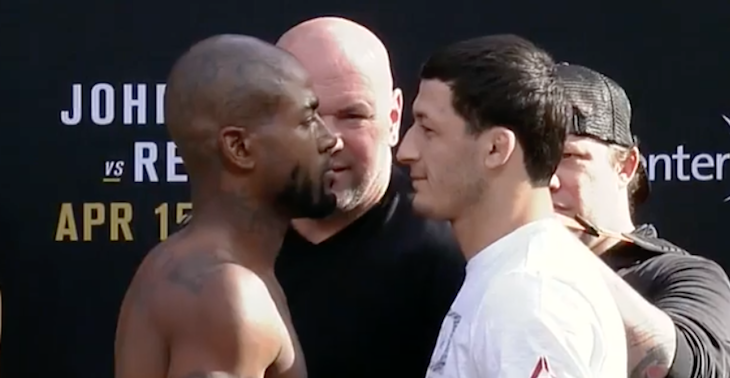 A lightweight scrap between Bobby Green and Rashid Magomedov took place during tonight’s UFC on FOX 24 prelims in Kansas City.

Round one begins and Green lands a hard low kick to start. Magomedov responds with a nice kick and then a right. Bobby comes forward but Magomedov catches him with a counter left hook. Green presses forward and pushes Rashid against the cage. Green working some good knees from the position. Rashid fires a knee back but it connects low on Green. The referee steps in and allows Green some time to recover. We restart and Bobby lands a pair of low kicks. Magomedov misses with a high kick. He connects with a follow up combination. Green presses forward with a kick. Rashid catches the strike and then counters with a left that knocks Bobby down. Green gets right back up and lands a solid combination of his own. Rashid comes forward but misses with an attempted high kick. Green counters him with a punch and then a low kick. Bobby presses Rashid against the cage and lands some good knees inside. He tries to pick Magomedov up and attempts to slam him to the floor but like a cat Rashid remains on his feet. Round one comes to an end.

Round two begins and Green lands a hard outside leg kick to start. The fighters exchange jabs. Rashid goes to the body with a punch. Bobby replies with a low kick. Magomedov scores with a body kick. Green circles out lands a left. He follows that up with a body kick and then a right hand. Rashid responds with a crisp counter right hand. Magomedov lands a punch and it cuts green. The referee steps in as he believes the strike was an eye poke. We restart and Rashid lands a left hand. Green ducks under a second punch and presses Rashid against the cage. He begins working some knees and then a couple of uppercuts. They break and Bobby lands a low kick. Magomedov responds with a hard left kick to the body. Rashid shoots in for a takedown but Bobby remains on his feet and scrambles free. He lands a low kick. Magomedov responds with one of his own and then a kick to the body. Green leaps forward with a left. Magomedov connects with a hard body kick to end the round.

Round three begins and Green lands a low kick. Rashid fires back with a body kick that lands. They fighters seem happy to trade kicks here. Bobby lunges forward with a left that misses. Rashid attempts a body kick but Green catches it. Bobby lands a nice flying knee to the body of Rashid. Bobby with another knee to the body of Magomedov. Rashid fires back with a left hook that finds a home. Both men lands left hooks. Rashid misses with a head kick. He follows that up with a combination that lands. Bobby accidently lands a kick low. We have a very brief break and restart. Magomedov with a nice kick to the body and then a left hand behind it. Bobby scores with a jab. One minute remains in the fight. Both men are throwing now. Bobby grabs a hold of Rashid and presses him against the cage. Good knees from Green in the clinch. Rashid breaks free. He lands a superman punch. A follow up body kick scores and the horn sounds to end round three.