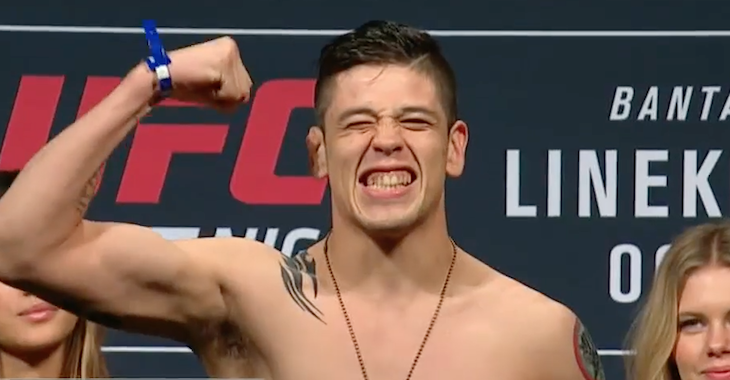 Round one begins and Ortiz comes forward and is able to push Moreno against the fence. Ortiz looks to score a takedown. Moreno scrambles to avoid but gives up his back. He is able to turn around and grabs a hold of Ortiz’s arm in search of a kimura. Dustin is able to secure the takedown but Moreno immediately wall walks. Ortiz drags him back to the canvas and looks to take his back. He can’t do it, and Brandon is back on his feet. Ortiz still has him in a body lock and drags him back to the floor. Moreno pops right back up and then breaks free and circles out. Brandon with a kick to the body. Ortiz fires back with a low kick. He shoots in and secures a takedown. Once again Moreno is able to stand back up rather quickly. Dustin is still all over him. He lands some knees from the clinch. Ortiz scores a trip and gets on top. Moreno uses an armbar attempt to roll into full mount. what a transition. Ortiz is able to scramble back to full guard and then winds up in top position. Another scramble and we are back on the feet. Round one comes to an end.

Round two begins and Moreno starts off quickly landing a pair of uppercuts. Ortiz with a low kick. Moreno replies with a heavy low kick of his own and then another. Ortiz continues to press forward. He is looking to get inside and clinch. Moreno lands a right hand and then a low kick. He goes to the body with a left and then lands a nice right hand. Ortiz ducks under a left hand and scores another takedown. Moreno immediately attempts to scramble but gives up his back. Still, he is able to shake off Ortiz and get back to his feet. Moreno lands a high kick that floors Ortiz. He chases after Dustin and jumps on his back. He locks in a body triangle and begins working for a rear-naked choke. 90-seconds remain. Moreno locks in the choke again and this time it is very tight. This one is all over!