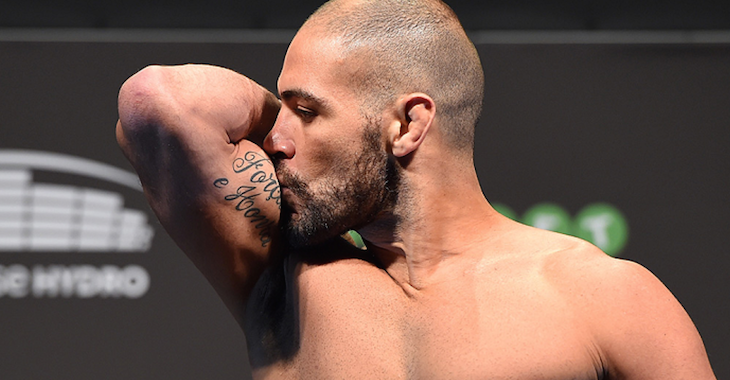 Round one begins and Leites lands a huge leg kick to start. He follows that up with a kick to the body and then another. Alvey is backed up against the cage. Leites hits him with two more hard low kicks. Sam circles off the fence. He throws a right hand that partially connects. Thales replies with a kick and then another. Alvey attempts a left hand and then a right but neither strikes connect. Leites connects with another inside leg kick. He follows that up with a good kick to the body. Alvey needs to utilize some movement here. Thales is just teeing off with leg kicks. He goes to the body of Alvey with a kick. Two minutes remain and Leites lands another hard leg kick. Alvey finally finds a home for a right hand. Leites smiles, circles out and then lands another low kick. Thales attempts a head kick but Alvey blocks it. One minute remains in round one. Another hard low kick from Leites. He retreats and then shoots in for a takedown. Alvey stuffs the attempt. Leites circles out and then lands a body kick. Round one comes to a end.

Round two begins and Leites starts right where he left off. Alvey told his corner in between round that he hurt his ankle early in round one. Leites is moving well here. He lands a nice right hand and then another hard low kick. Alvey with a pair of good shots. Alvey clinches up and the fighters battle along the fence. They break and Leites lands another heavy low kick on the injured Alvey. Sam eats the shot and then charges forward. He lands a left and then another and Leites staggers backwards in retreat. Alvey chases after him but Thales shoots in and secures a takedown. Alvey is able to battle his way back to his feet. Round two ends with the fighters in the clinch.

Round three begins and Leites lands a good low kick to start. Alvey is pressing the action now. He charges forward with a right hand. Leites connects with an accidental shot to the groin. The referee steps in and stops the action. Alvey recovers and we restart. Sam misses with a left. Leites lands a body kick and then a low kick. Leites circles out and then comes in with a hard low kick. Alvey chases after Thales and lands a right hand. He tries to clinch with the Brazilian but Leites breaks free. Thales lands a head kick. Alvey eats it. Leites with an accidental eye poke. Once again we break. Alvey recovers from the illegal strike and we restart. Leites lands a pair of kicks. Alvey responds with a left. Leites goes right back to the body with a kick and then circles out. Alvey is pressing the action. Leites attempts a high kick but Alvey blocks it. Sam presses forward with a right. Leites shoots for a takedown. He cannot secure it. They battle against the cage in the clinch. The horn sounds to end round three.