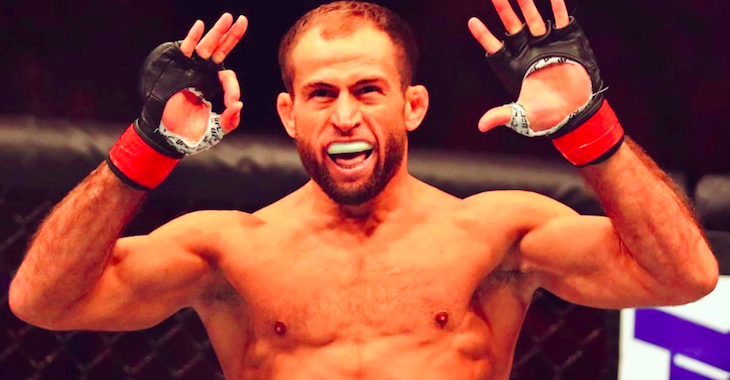 Mairbek Taisumov (26-5 MMA) enters today’s contest on a five-fight win streak, with all five of those victories coming by way of knockout.

Round one begins and the fighters touch gloves. Taisumov misses with an attempted kick to the body. Green takes the center of the octagon and throws a jab. Mairbek fires right back with a hard low kick. He lands another, this time to the inside of the thigh of Green. Desmond presses forward but just avoids a big right hand from the Russian standout. Taisumov circles and then rips a right hand that misses the mark. He follows that up with a low kick which lands. A body kick now from Mairbek. Green replies with a jab to the body. He presses forward and lands a left hand over the top. Mairbek with an accidental eye poke and we have a short break while Desmond recovers. We restart and Green reels off a pair of low kicks. Mairbek responds with one of his own. Green moves along the fence. He leaps in with a right hand over the top that lands. Mairbek immediately replies with a brutal low kick. Green eats that and fires off a kick of his own. Ten seconds remain. Mairbek lands a right hand. Green responds with a left. Round one comes to an end.

Round two begins and Green gets things started with a kick to the body. He comes forward and lands a nice left jab to the mid section of Mairbek Taisumov. Both men seem tentative to start round two. Green lands a low kick and Mairbek responds with one of his own. Green shoots in for a takedown but Taisumov is able to stuff the shot. Green with a nice left jab and then a body kick. Mairbek responds with a big left hook. These guys are starting to throw now. Green with another nice left hand. Mairbek throws a low kick but it connects to the groin of Green. Desmond drops down in pain and we are forced to break while he recovers from the illegal strike. We restart and Taisumov comes forward with a jab. Green responds with a looping left hand and then shoots in for a takedown. It is not there. Taisumov breaks free and lands a big head kick and then a right hand that hurts Desmond. Green is on his bicycle now and Mairbek stays on him with kicks. Desmond unleashes a left hand now that lands flush. Round two comes to an end.

Round three begins and Mairbek Taisumov is able to land a low kick and then a right hand right off the hop. Taisumov is pressing the action a lot more here in round three. Desmond needs to get something going. He finally steps into the pocket and lands a left hand. Taisumov swings and misses with a wild body shot. He lands a follow up low kick. The Russian knockout artist is trying to get inside on Green but Desmond just won’t let it happen. Mairbek looks frustrated as he continues to stalk Green with no solid execution of strikes. Green circles along the fence. Mairbek comes forward with a flurry. The horn sounds to end round three.