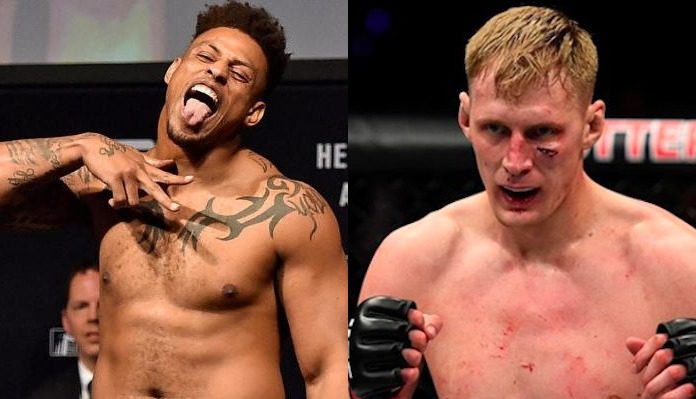 Volkov (30-7 MMA) will be returning to action for the first time since UFC 229 in October of 2018, where he suffered a last second knockout loss to Derrick Lewis.

Had he held on another 11-seconds to defeat ‘The Blast Beast’, ‘Drago’ would have likely received the next heavyweight title shot as he was then-riding a six-fight winning streak.

Meanwhile. Greg Hardy (5-1 MMA) will be making a quick turnaround after having just fought Ben Sosoli last month in Boston. That fight was originally ruled a win for Hardy, but was later changed to a no-contest due to Hardy’s use of an inhaler between rounds two and three.

Hardy has gone 2-1 with 1 no-contest since joining the UFC in January.

Round two begins and Greg Hardy told his corner between rounds he hurt his right hand. Volkov is looking to work his jab early here. He lands a nice low kick. Hardy replies with one of his own. Volkov is putting on the pressure. Hardy responds with a jab to the body followed by a kick. Volkov circles out and resets. Hardy finds a home for a good right hand. He is still throwing the fist despite the injury. Volkov misses with a counter hook but lands a front kick. Greg Hardy leaps in with a jab followed by a spinning back fist. Volkov goes high with a kick but Hardy blocks it. Good kicks to the body from the Russian. Hardy goes back to his jab. Round two comes to an end.

Round three of the UFC Moscow co-main event begins and Greg Hardy comes out aggressively. He is likely down 2-0 on the scorecards but that said, he’s had a terrific showing. Hardy with a right up the middle. Volkov circles and lands a body kick. He goes low with a kick that lands. Hardy with another jab to the body. He is trying to setup the right hand over the top. Volkov with a pair of heavy low kicks. Hardy replies with a stiff jab. Two minutes remain. Alexander Volkov with a kick to the body. The former Dallas Cowboy lands a low kick but eats a high kick from the Russian. Hardy stays on his feet but he felt that one. Good jabs from both men to finish.

Who would you like to see Alexander Volkov fight next following his decision victory over Greg Hardy at UFC Moscow? Sound off in the comments section PENN Nation!