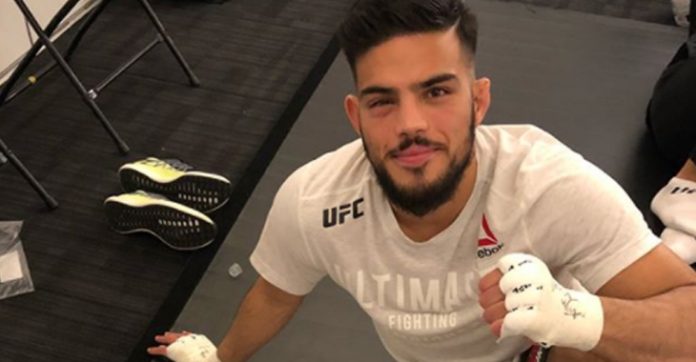 Nothing in this fight game is ever certain. Just an hour or two ago, Nasrat Haqparast was supposed to kick off UFC London against Nad Narimani. Now, the fight card is pushed back 15 minutes and Haqparast is out of his fight for what may be the first time anyone has had a fight canceled in the UFC due to an infectious eye.

“Based on advice from the UFC medical team on Saturday morning, Nasrat Haqparast was deemed unfit to fight due to an infectious eye condition and his bout against Nad Narimani has been cancelled. UFC FIGHT NIGHT: WERDUM vs. VOLKOV will proceed with 10 fights, beginning at 6pm GMT / 2pm ET / 11am PT.” — Statement provided per UFC’s official website.

Our first fight of the night is a good one in the lightweight division!@Nasrat_MMA takes on @NadNarimani LIVE & EXCLUSIVE on @UFCFightPass! #UFCLondon pic.twitter.com/w0SjggZpdA

“News regarding my fight at UFC London. We’re sitting in the locker room and it’s just 1 hour left to the fight but unfortunately the UFC doctors stopped my fight. I got an eye infection on fight week, got 3 different medications and from day to day it became worst. I had sunglasses on on the official weigh ins to not show my infected eye and still try to fight. We tried everything possible to deliver the best performance of my life. I had the best fight camp in my life.” — Nasrat Haqparast via his official Instagram.

The fight card will continue on like normal, only instead of starting at 1:45 PM EST, it will kick off at 2:00 PM EST with Mark Godbeer and Dmitry Sosnovskiy’s heavyweight clash. It just goes to show you that nothing is for sure in this fight game until the two are locked in the cage together. We hope Haqparast recovers quick and gets another fight booked.