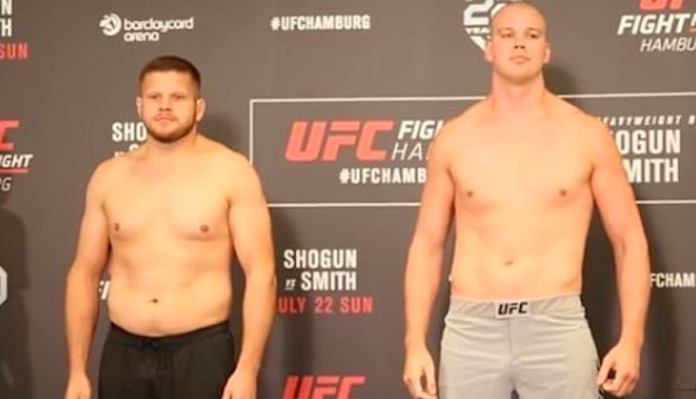 After a measured start to the first round, Tybura completed a single leg takedown with apparent ease. From there, the Polish heavyweight spent several minutes in top position, landing some nice shots to Struve’s body and head, while staying out of danger in his foe’s wiry guard. Eventually, however, referee Marc Goddard stood the contest up. After a brief period on the feet, during which Struve landed some nice low kicks, Tybura closed out the round with a deftly timed double-leg takedown.

Perhaps sensing an advantage on the mat, Tybura looked to his wrestling early in the second, landing another double-leg. After being warned by referee Marc Goddard to keep his toes out of the cage, Struve escaped to the feet, and promptly ate a hard elbow. From there, however, Struve started to land some big shots of his own — including a front kick to the face that wobbled Tybura — which forced the Pole to shoot in on another double-leg. Tybura then rode out the remainder of the round on top.

In the third, the pair spent several minutes on the feet, where Struve continued to batter his foe’s legs with low kicks. Eventually, however, Tybura once again turned to his takedowns, landing his fifth in nine attempts. Having secured top position, Tybura then force-fed Struve a multi-course meal of elbows. Struve attempted to lock up a triangle, but Tybura fought off the attempt, and finished the fight raining down punches from top position.

Unsurprisingly, the judges were swayed by Tybura’s repeated success with the takedown, and awarded him a unanimous decision win as a result. He’s now 17-4 overall. Struve, meanwhile, leaves the cage with an overall record of 28-11 — and one of the nastiest cuts we’ve seen in awhile.