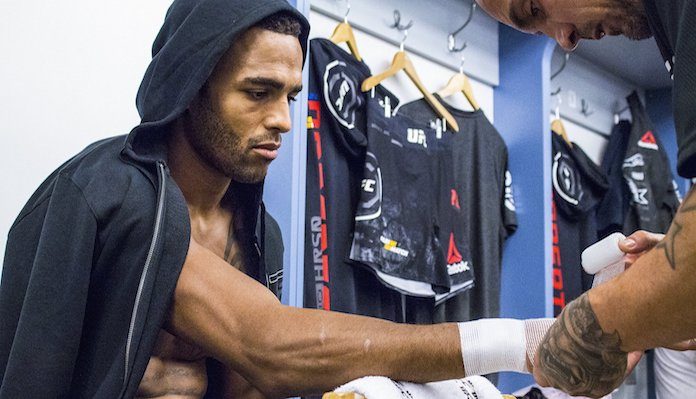 The second bout of the UFC Hamburg main card occurred in the welterweight division, where England’s Danny “Hot Chocolate” Roberts collided with Germany’s David Zawada, who stepped in to replaced the injured Alan Jouban on short notice.

It was an extremely fun fight that, contrary to Roberts’ boxing skill, occurred almost entirely on the mat.

Round one of this fight seemed to go to Roberts, who was able to ground the fight, and amass a significant period of top time. That said, Roberts was not without scares in this otherwise strong first round, as he very nearly succumbed to an armbar from Zawada in the final seconds.

Early in round two, Zawada was able to complete a nice takedown. From there, the debuting Zawada flaunted an impressive ground game, coming out on top in a series of lightning quick scrambles and briefly threatening with a guillotine. Though Roberts briefly wound up in top position, Zawada used a sweep to reclaim the position for himself. The pair then briefly returned to the feet. At this point, Roberts shot in for a takedown, but this attempt failed, and he ended the round defending a face-choke from his German foe.

Zawada landing early in round 2 and staggers Roberts! #UFCHamburg pic.twitter.com/ccH4Pse3gj

Early in the third, Zawada once again threatened with his grappling, briefly trapping his foe in a D’Arce choke. After a brief struggle, Roberts escaped this position — but that’s not where the trouble ended for him, as he then had to fight off a leg lock attempt. From there, the pair engaged in a series of wild scrambles, that saw them swap top position seemingly countless times. The fight ended with Roberts pouring on a bit of ground and pound.

What a finish to that fight!

In the end, the UFC Hamburg judges awarded this scramble-filled fight to Danny Roberts by split decision. Roberts his now 16-3 overall, while David Zawada falls to 16-4- overall.