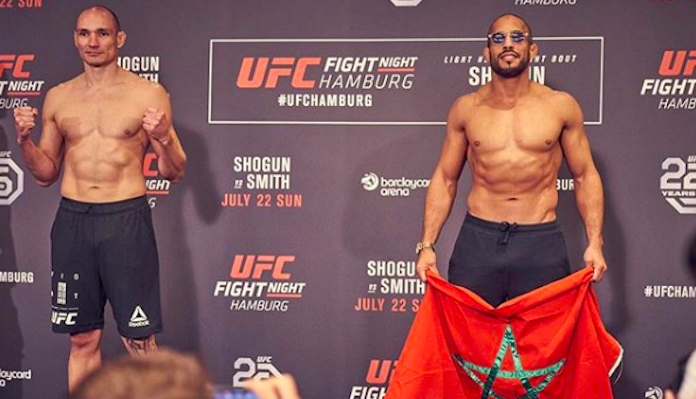 The German fighter began this contest with extreme aggression, wading in repeatedly with huge punches, as the crowd chanted his name. Miranda, meanwhile, seemed content to hang back and assess his foe’s timing. Eventually, Miranda succeeded on a takedown, which he used to rack up a bit of control time. As the round wore down, however, Azaitar exploded back to his feet, where he unleashed a meteor shower of looping punches until the horn sounded.

Azaitar lands and has Miranda wobbled at the end of the round! #UFCHamburg pic.twitter.com/nqxBqh5TpW

Having had enough of Azaitar’s power punches in the first, the striker Miranda looked to his grappling in the second. After landing a takedown, he climbed into top position, and threatened with a deep triangle. Unfortunately for Miranda, Azaitar was able to explode out of this dangerous position, and climb into his foe’s guard. After a brief period of inactivity, the referee stood the pair up, at which point Azaitar finished the round with another big onslaught.

In the third, Azaitar once again found himself in top position. Out of nowhere, however, Miranda was threatening with a deep armbar that may well have caused lesser fighters to tap. Miraculously, Azaitar was able to escape — but he wound up underneath his opponent, where he endured a stifling top game and ate a number of punches to the head. Just when it looked as though Azaitar was doomed to spend the rest of the round on his back, he swept his foe, and stole position for himself. Azaitar then took his foe’s back, only to lose the position and end up on bottom as the round ended.

By the time the third round ended, there could be no other option than an Abu Azaitar win. The hometown hero was awarded a unanimous decision victory to the roar of a friendly crowd.