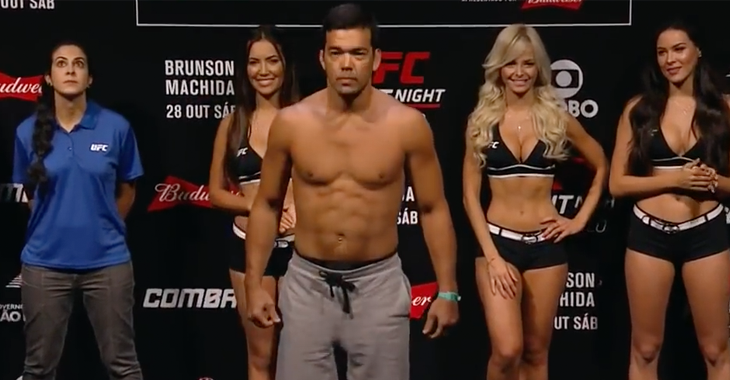 Round one begins and Anders comes forward quickly. Machida takes his famous karate stance. Machida with a kick to the body. He lands another to the inside of the thigh of Eryk. Machida circling along the fence. He lands another good kick. A big low kick from Lyoto causes Anders to fall to the ground. Machida working from full guard. He stands up. Machida with a kick to the leg while Anders is down on his back. Anders looks to lock up a leg lock. It is not there. More kicks from Machida while Anders lays on his back. Lyoto finally attacks with punches but Anders scrambles back to his feet. Eryk with some pressure now. He eats a hard low kick from Anders. Machida with another nice inside low kick. He circles along the cage. Anders attempts a head kick but it is blocked. Round one comes to an end.

Round three begins and Anders gets inside quickly and scores a takedown. Machida gets back up but eats a left followed by a knee. Lyoto is bleeding badly now. Anders smiles. Machida comes forward with a left hand that just misses the mark. Anders remains patient but continues to press forward. Machida with a nice kick to the body. He circles along the fence. Lyoto gets back to the center of the octagon and lands a left hand. Anders replies with one of his own. Ninety seconds remain. Anders with a knee followed by a left that partially connects. Machida circles and then lands a low kick. Both men connect with punches. Anders with a low kick. Anders lands another hard left. He presses Lyoto against the fence and searches for a takedown. Machida is busted open now, Anders with a knee. Round three comes to an end.

Round four begins and Lyoto comes forward. Anders just misses with a left. Machida with a hard kick to the body. Anders tries to clinch up but Machida says no. Another kick from Machida. Anders comes forward with some huge shots, one of which partially connects. Machida escapes and lands a low kick. Machida leaps in with a right and Anders catches him with a left. Machida drops to the floor but quickly gets back up to his feet. Anders greets him with a knee. He presses Lyoto up against the cage and works in another knee. The fighters break. Machida lands a kick but Eryk catches it and presses him back up against the cage. One minute remains in round four. Anders secures a takedown but Lyoto is right back up to his feet. Machida breaks free and runs to the center of the cage. Round four comes to an end.