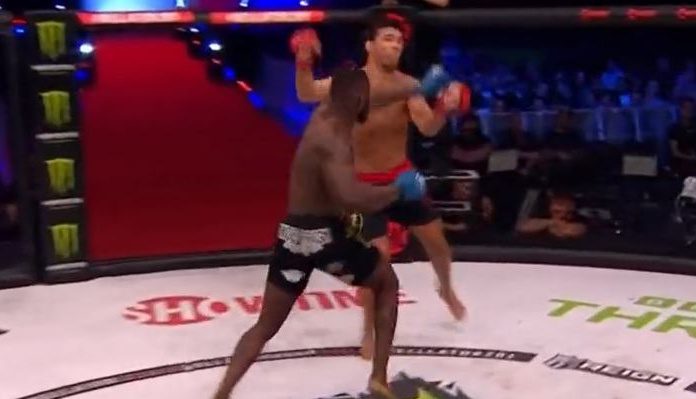 Machida (26-12 MMA), a former UFC light heavyweight champion, will be looking to snap a three-fight losing skid this evening in London. ‘The Dragon’ is coming off three straight decision losses to Gegard Mousasi, Phil Davis and Ryan Bader respectively.

Meanwhile, Fabian Edwards (10-2 MMA) will also enter Bellator 281 with hopes of returning to the win column. ‘The Assassin’ is coming off back-to-back decision losses to Costello van Steenis and Austin Vanderford.

Round one of the Bellator 281 co-main event begins and Lyoto Machida comes out in his classic karate stance. Edwards paws with his jab and then lands a low kick. He lands another and then ‘The Dragon’ replies with a low kick of his own. Another low kick exchange. Edwards goes to the body with a kick. Machida continues to chip away low. Fabian rushes in with a flurry and pushes Lyoto up against the fence. Machida reverses the position and then drags Edwards to the floor. The British fighters scrambles right back up to his feet. Lyoto Machida forces the clinch again and pushes his opponent up against the cage. A couple of good knees land for the former UFC champion. Edwards reverses the position and lands a knee of his own. He drops for a takedown but it is not there. A big combination now from Fabian and Lyoto Machida is rocked. He floors ‘The Dragon’ with a punch and then puts him out cold with ground and pound! WOW!

Who would you like to see Edwards fight next? Do you think Machida should hang up his gloves following his fourth consecutive loss in a row?