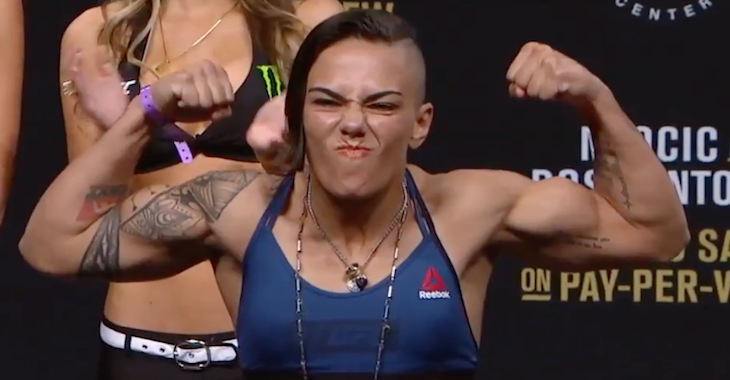 Round one begins and Gadelha throws a front kick to get things started. Jessica presses forward but Claudia catches her with a nice left hook. Both women connects with combinations. Claudia presses forward and lands a pair of right hands. She follows that up with a nice elbow. Another huge shot lands for Gadelha, this time a left hook. Jessica presses forward but Gadelha catches her with another elbow. Claudia is working Andrade here. She lands a left and then another elbow. Jessica is busted up. She is bleeding out of her forehead. Both women stand and trade punches in the pocket. Andrade presses Claudia against the cage. She lifts Claudia up and slams her to the ground. Gadelha locks in a guillotine choke. Andrade appears to be shaking it off. She does and winds up in top position. Andrade moves to half guard and works some good left hands. She is bleeding all over Claudia here. Thirty seconds remain. More punches from Andrade. Both women are landing punches from the position now. Jessica with the bigger shots from the top. Round one comes to an end.

Round two begins and Gadelha lands a nice right hand. She shoots in and scores a takedown. Jessica scrambles right back up to her feet. The ladies clinch against the cage. Andrade works for a takedown of her own. Claudia lands a knee. The fighters break. Gadelha shoots in for a takedown but it is not there. Andrade sweeps and winds up in top position. She lands a pair of nice elbows from the top. Claudia is bleeding. She gets to her feet but eats a knee and then a right hand for her troubles. Both women are wearing it now. Claudia with a kick to the body. Both women stand and trade. Claudia lands a nice right hand to finish the exchange. Andrade presses forward and lands a barrage of punches. Claudia shoots in but there is nothing there. Jessica is all over Claudia now. She lands a hard knee. More punches from Andrade. She has Claudia pressed against the cage. Claudia breaks free and fires back with a nice right hand over the top. Andrade once again leaps in with a flurry. She connects with a big right. Claudia looks tired. Jessica shoots in but Claudia locks in a guillotine choke. It is tight. Jessica is doing her best to survive. The horn sounds to end round two. We are going to round three.

OH MAN @ClaudiaGadelha_ going for the guillotine at the end of the round! Look at the exertion!! WHAT A FIGHT!!#UFCJapan pic.twitter.com/UuI90Ny6VH

Round three begins and Claudia lands a nice left hook in the first exchange. She shoots in for a takedown but it is not there. Jessica presses her agains the cage and works some knees. She switches to an uppercut and then drops down for a takedown. She lifts Gadelha up and slams her to the canvas. She begins working some heavy ground and pound. Claudia is not loving this. Andrade working from half guard. She works some big right hands. Huge ground and pound from Andrade now. This is close to being stopped. Two minutes remain. Claudia looks exhausted. She is just trying to survive at this point. Andrade moves to side control. 90 seconds remain. Claudia scrambles and begins to work her way up. Andrade peppers her with knees. She takes the back of Claudia. Somehow Gadelha gets back up. The fighters exchange shots. Andrade slams Claudia again. Round three comes to an end.