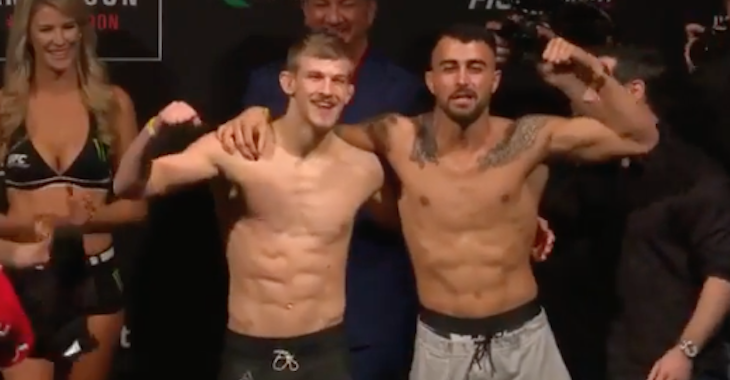 A lightweight bout between Arnold Allen and Makwan Amirkhan kicked off the main card of today’s UFC Fight Night 107 event in London, England.

Round one begins and Amirkhan fires off a wild strike to start. Allen circles out and then comes forward with a combination. Amirkhan avoids the strikes and then shoots in and scores a takedown. Allen is quick to scramble back up to his feet. Amirkhan stays on him and drags Allen back down to the canvas. He is searching for a choke hold now. Allen breaks free but Makwan is still all over him. Another submission attempt from Amirkhan but it is not there. Allen scrambles back to his feet and then scores a takedown of his own. He begins working from half guard. Some short elbows and punches land for Allen. Arnold with a hard elbow from the top. Makwan did not like that and quickly scrambles back up to his feet. He presses Arnold against the cage and then drags him to the floor. That doesn’t last long however as Allen almost immediately pops back up to his feet. The fighters clinch along the cage. The referee steps in and forces the fighters to break. Makwan with a right hand. Allen responds with one of his own and then charges forward with punches to end round one.

Round two begins and Amirkhan immediately shoots in and scores a takedown. He attempts to take the back of Allen but then switches to a guillotine choke. He transitions to a leg lock but is unable to secure the submission. Allen is on top now and working from half guard. He moves to full mount and unloads some short shots. Makwan is able to scramble back to half guard but eats some hard elbows for his troubles. Makwan is able to wall-walk and get back to his feet. Amirkhan throws a right hand and then shoots in for a takedown. Allen defends the shot and then drops down for a guillotine choke attempt. Makwan defends the submission and winds up in top control. He begins working from half guard. A nice left hand gets through for Makwan. Thirty seconds remain in the round. Allen is able to scramble back to full guard. He attempts an arm lock but it is not there. Round two comes to an end.

Round three begins and Amirkhan lands a crisp right to start. He faints with a takedown attempt. Allen is looking very light on his feet as he bounces around the cage. Makwan shoots in for a takedown but is stuffed. Allen just misses with a spinning back elbow. He connects with a big overhand left on Makwan. Amirkhan fires right back with a right that partially lands. He throws another right that lands flush and then shoots in and drags Allen to the floor. Arnold pops back up but Makwan is on his back. Allen transitions and the fighters are now clinches against the cage. Allen scores a trip but Makwan rolls through it and gets back up. The fighters continue to grapple and after many exchanges Makwan is the fighters who ends up on top. Two minutes remain and Amirkhan is working from half guard. Allen fights his way back to full guard and the referee quickly stands the men back up. Allen presses Amirkhan back up against the cage and begins working for a takedown. He lands a nice knee to the body of Makwan and then another. Allen drags Makwan to the floor and winds up in mount. He takes the back of Makwan and locks in a rear-naked choke. The horn sounds before he can finish the fight.