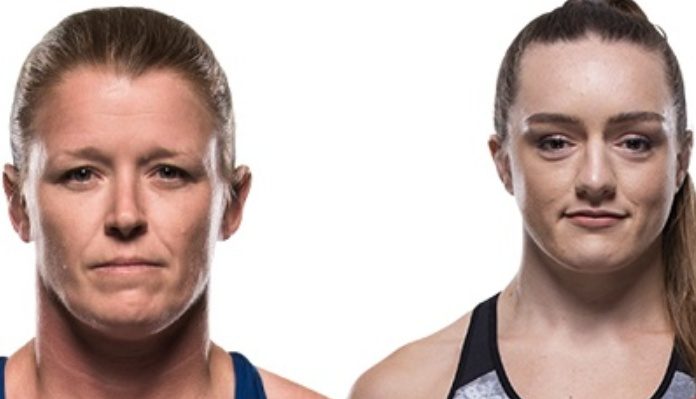 After losing one half of its co-main event earlier this week, UFC Sao Paulo now has lost the whole thing as a replacement has been found but the date changed.

Injury after injury has seemed to occur for the UFC’s return event to Brazil on September 22 and here’s to hoping there will be no more.

After Ketlen Vieira (10-0) was announced out of the originally scheduled bantamweight co-main event bout with former Invicta FC champion Tonya Evinger (19-6), a replacement was needed.

MMAJunkie now confirms that filling in for Vieira to face Evinger will be a fellow Invicta standout to Evinger in the currently No. 9 ranked contender, Aspen Ladd (6-0). The bout has been bumped back to October 6 for UFC 229 rather than staying on UFC Sao Paulo.

The 23-year old Ladd has proven to be one of the top rising prospects in the division as her record shows.

Having fought all but her last fight in Invicta, Ladd will be making her sophomore UFC appearance here as will Evinger. And when doing so she’ll hope to get her sixth career finish (four TKOs, one submission).

Both Ladd and Evinger were hoping to have had their second UFC fights earlier than this but for one reason or another, it just wasn’t meant to be.

For Evinger, she was supposed to tale on Marion Reneau at UFC Austin in February but was forced out due to injury. In Ladd’s case, she was going to take on Leslie Smith at UFC Atlantic City in April but would end missing weight and coming in at 137.8-pounds. When trying to see whether or not Smith would still accept the fight, Smith would decline.

The two fighters now get to show their skills on what’s expected to be the biggest UFC event of all time.