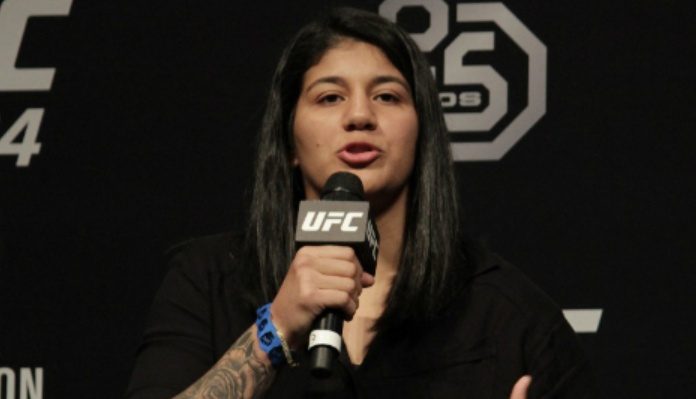 After losing out on its original main event, UFC Sao Paulo is now unfortunately in need of a new co-main event matchup as well.

That was until Teixeira was injured out of the scheduled bout shortly after and then replaced by the exciting middleweight, Thiago “Maretta” Santos.

But it now has been reported by MMAJunkie that the co-main event has taken a hit too as the No. 2 ranked bantamweight contender Ketlen Vieira has been injured out of her bout with Tonya Evinger. The UFC is in search of a replacement.

A follow-up report from MMAFighting confirms that the injury is to Vieira’s knee and will require surgery.

The undefeated 10-0 Vieira last fought in March of UFC 222 when she dominated the former title challenger Cat Zingano on route to a questionably judged split decision victory.

The win marked Vieira’s fourth in the UFC with a big upset second-round submission win over Sara McMann at UFC 215 preceding it.

For the remaining party in Evinger, she is looking to return to action for the first time since UFC 214 when she fought for the vacant featherweight title against Cris Cyborg.

The former Invicta FC bantamweight champion Evinger was hoping to return sooner than September as she was scheduled to take on Marion Reneau at UFC Austin but suffered an injury of her own.

Assuming Evinger still gets her one fight this year, it will mark Evinger’s first year she only fought once since 2013.

Evinger’s long-awaited UFC debut didn’t make the best impression on the fans as those who didn’t know about her will assume she was just another lamb thrown to the slaughter. But at 135-pounds, Evinger has more than established herself as one of the very best in the world as she’s gone 10-0 (1 NC) since her last divisional loss in 2011 to the previously mentioned McMann.