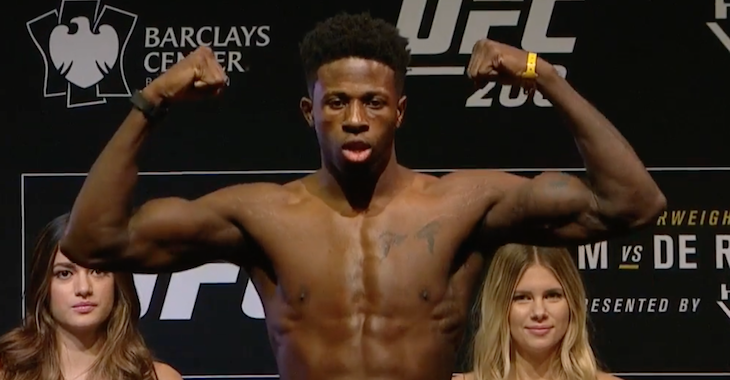 Round one begins and Brown moves forward early while utilizing his jab. Gall tries to circle off the fence but Brown won’t let him. Randy with a nice right hand. Gall replies with a good shot of his own. The fighters clinch along the cage. Brown starts landing some nasty knees to the body. He goes upstairs and lands a hard knee to the forehead of Gall. Randy scores a trip and takes Mickey to the floor. He begins working from side control but Gall quickly scrambles back to full guard. Brown opts to stand up and begins landing leg kicks. Brown dives back in to the guard of Gall. Brown begins working some big elbows from the top. Gall is attempting to transition for a triangle choke attempt but Randy isn’t having it. A big elbow from Brown causes a big gash on the forehead of Mickey. The horn sounds to end round one.

Round two begins and Randy comes out quickly. He throws a head kick and then a left hand. Gall dives for a leg but winds up on the bottom. Gall scrambles and winds up in top position. Randy immediately transitions for a shoulder lock but Mickey is able to avoid the submission attempt. Gall is in side control now with three minutes left in round two. Gall is landing some short left hands from the position. Brown is attempting to scramble but he is stuck here. Mickey moves to the back of Brown but Randy scrambles and gets back to guard. Gall quickly hops over and winds up in side control. He locks up a crucifix but Randy quickly escapes. Gall moves to full mount but the position is short lived as Brown is able to escape out the back door. Round two comes to an end.

Round three begins and Brown is able to land a jab followed by a huge uppercut that drops Gall. He begins raining down some ground and pound in top position before Mickey is able to tie him up. Gall is a bloody mess now. Brown would be wise to stand back up here. He continues to work from full guard. He lands a couple of nice left hands. Gall is trying to sweep but Randy won’t let him. Mickey is landing some shots from the bottom now. Under two minutes remain in round three. Mickey Gall receives a fourth warning for grabbing the fence. He looks to lock up a guillotine choke and does. Randy is able to pull his head free. That was a close call. More shots from the top now by Brown. Randy opts to stand up and instructs Mickey to do the same. Gall charges at him with punches before the horn sounds to end round three.