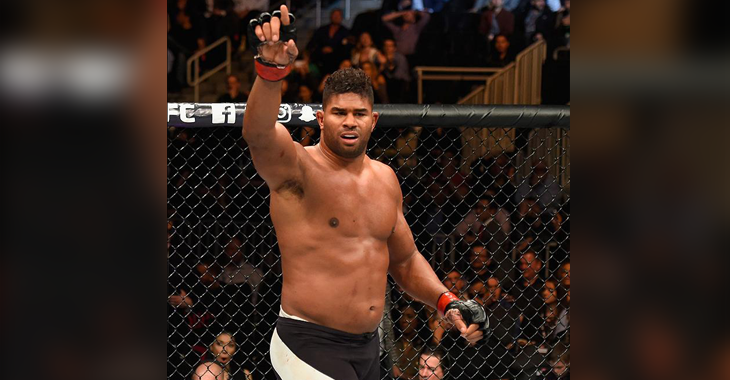 Round one begins and Werdum comes out throwing a jumping side kick. It misses as Alistair Overeem slides out of the way. Werdum feints with a body kick. Alistair is holding his hands low here. Fabricio goes to the body with a kick. Alistair returns fire with a head kick. Werdum partially blocks the strike and then fires off a kick of his own. They fighters clinch and Overeem lands a nice knee. They break and look to find the range. Werdum charges forward with a combination that misses. Alistair with a side kick to the leg. He trips Werdum up with another kick. Fabricio stands back up. He lands a kick to the body but Alistair counters with a right hand. Werdum eats it and then comes forward with a kick. Fabricio with another snapping kick to the body. Alistair is waiting to counter here but Werdum is landing more. He is going to need to get busy. Werdum with a kick but Alistair replies with a straight right hand. Round one comes to an end.

Round two begins and Overeem lands a nice kick to the body of Werdum. Fabricio circles and Alistair catches him with another hard body kick. Werdum clinches up and then decides to pull guard. It works. Alistair is now working from full guard. He breaks Werdum’s hold and opts to stand up. Probably a smart decision. Back on their feet and both men land kicks to the body. Overeem lands a nice left and then a knee to the body. Werdum drops and Overeem jumps on him. He begins working some short shots from the top. Shortly after he scrambles back up on to his feet. Werdum gets up and Overeem lands a left hand. Werdum with a low kick. Overeem catches him with a left hook and then a hard kick to the body. Amazing combination from Overeem. Werdum slides out and eats one last jab. The Brazilian circles and then leaps in with a combination that lands. A good leg kick now from Werdum. Alistair replies with a jab. Overeem with a huge left hook. Werdum somehow ate that shot. He moves forward and grabs the clinch. The horn sounds to end round two.

Getting loose here in round 2! @AlistairOvereem lands a nice combo on Werdum #UFC213 pic.twitter.com/oujbL3Iv25

Round three begins and once again Werdum starts off with leaping side kick. Overeem misses with a huge left hook. Werdum charges in with a combination. He is putting the pressure on Overeem now. A knee lands for Werdum. He presses Overeem against the cage. They break and Werdum is able to catch Overeem with a big knee. Alistair is down. Werdum shoots in and gets on top but Alistair rolls and reverses. Overeem opts to stand up but he still is wobbling. Werdum rushes in with strikes. He connects with a couple of nice right hands. Werdum shoots in and secures a double leg takedown. This is not good for Overeem. Werdum is working some short punches and elbows now. Overeem is doing a good job of maintaining guard so far. Werdum with some shots to the body to close out round three.