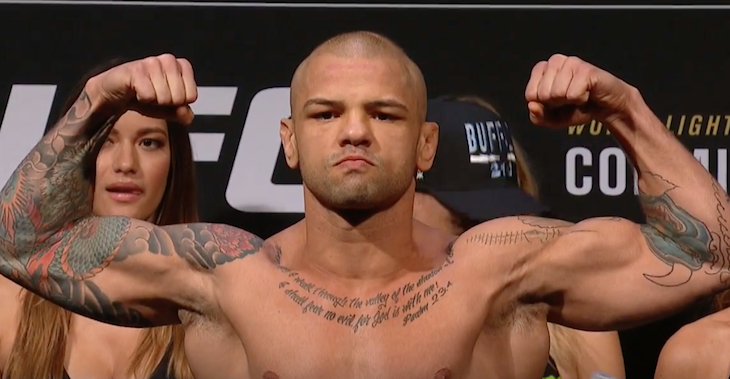 Round one begins and Cote lands a low kick to start but Alves counters with a right hand. Both men fire off leg kicks. Cote comes forward with an uppercut that misses the mark. He goes to the body with a jab and then follows that strike up with an inside leg kick. Alves replies with a hard low kick of his own. Cote misses with a combination and Alves lands a good knee inside. Both men fire off punches. Cote lands a right hand over the top. He presses forward and clips Alves with a pair of right hands. Thiago circles out and lands a low kick. Cote fires back with one of his own and then a left hand. Alves responds with a big left hook that drops Cote. Thiago quickly jumps on the Canadian fighter and begins landing some ground and pound. Cote scrambles but cannot get back to his feet. More shots from Alves. He lands some hammer fists to close out the round.

Round two begins and Alves misses with an early leg kick attempt. Cote presses forward and scores with a right hand. He follows that up with a combination and presses Alves against the fence. Thiago circles off the cage and lands another big left hand. Cote eats it this time but it definitely has his attention. Another left scores for Alves. Cote circles out but eats a leg kick on his way out. Alves comes forward and lands a right hand and then a hard low kick. Still, Cote takes the punishment and presses forward. Cote with a low kick and then a right hand behind it. Patrick with another right and then a left hand that scores. He is starting to find his range. Alves circles out and fires off a high kick that misses. Cote presses forward but Alves catches him with another big punch that drops him. Patrick is right back to his feet but on wobbly legs. Cote with an inside leg kick. Alves misses with a counter left. Thiago pressing forward now. He lands a big leg kick. Patrick fires back with a right hand. Round two comes to an end.

Round three begins and Alves lands a kick to the groin of Cote to start. The referee steps in and we have a brief break. We restart and Thiago lands a low kick. Cote is coming forward with a lot of pressure now. He fires off a combo that appears to stun Alves. He shoots in for a double leg takedown but cannot secure it. Still, he has Alves pressed against the cage. Thiago switches the position and works some knees. Alves scores a beautiful trip takedown and begins working from half guard. Cote is able to scramble and get back to the full guard position. He begins throwing up his legs in hopes of an armbar but it is not there. Alves decides to let Cote back up. Patrick is bleeding badly now. 80-seconds remain in the final round. Alves lands a hard inside leg kick. Cote fires back with one of his own and then a right hand. Alves retreats and then comes forward with a left hand. Cote avoids and then lands a big uppercut. He scores with another. He is showboating now but that is not going to win him this fight. Alves partially lands a flying knee to close out the fight.