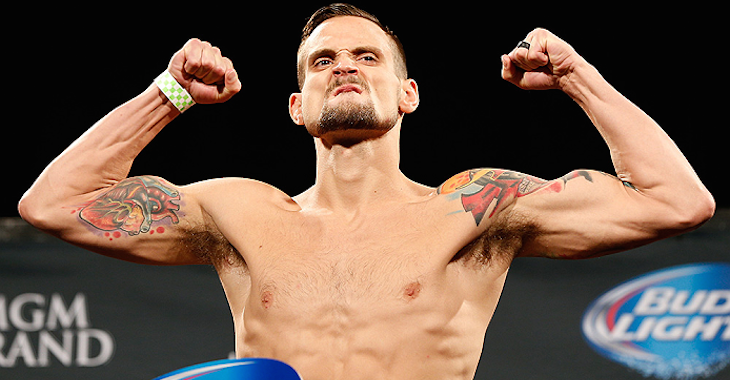 TUF 25 competitors Tom Gallicchio and James Krause squared off during the prelims of tonight’s finale event in Las Vegas.

Round one begins and Gallicchio immediately presses forward in search of an early takedown. Krause is sticking and moving early. James throws a kick but Tom catches it and gets him to the floor. Gallicchio immediately takes the back of Krause. This is where Tom wants to be. James quickly scrambles and is able to shake Tom off and get back to his feet. Nice shots from the pocket by Krause. His boxing looks on point tonight. Gallicchio shoots in for a takedown but it is stuffed. Krause with a few nice punches from the pocket. Tom again shoots in but James is able to shake him off. Krause with a head kick. He is landing everything he throws at the moment. More big shots from Krause before the horn sounds to end round one.

Round two begins and Tom is able to find a home for a pair of right hands. Krause quickly replies with a combination of his own. James with a stiff jab. Tom shoots in for a takedown but the attempt is stuffed by Krause. Gallicchio is able to find a home for another right but James circles and then lands a beautiful body-head combination. Not a lot of work from Krause here. He eventually finds a home for an uppercut. Tom is looking to find a way inside but Krause is utilizing some solid footwork to keep him at bay. Round two comes to an end.

Round three begins and Krause lands a nice combination that appears to stun Tom. Gallicchio leaps in with a wild shot that misses the mark. Krause is staying on his bicycle and keeping Tom from doing much of anything with his jab. James is landing shots whenever he wants it would seem, but he doesn’t appear to be going after the finish here. Krause with a stiff jab. He circles and then waves Tom forward. Gallicchio attempts to press the action but James backs off. Krause circles and comes forward. He lands a big head kick that appears to stun his opponent. Tom shoots in for a takedown but it is not there. The horn sounds to end the fight.