Rising Bellator MMA star Michael “Venom” Page took it upon himself to make sure he was a part of the talk following Ronda Rousey’s devastating UFC 207 loss to Amanda Nunes.

Nunes defended her UFC women’s bantamweight title for the first time and made quick work of Rousey, needing just 48 seconds to TKO the former UFC champion.

Following Rousey’s second straight loss in the UFC, Page took to social media to mock Rousey getting punched in her bout against Nunes. Page made a video with a song and dance called “Do the Rousey” and even asked fans to do their own version of the dance with a hashtag campaign.

Page didn’t stop there, posting another video clip of Rousey vs. Nunes with the audio from Rousey’s corner, again mocking the situation.

With the tweet from Browne being deleted, here is a screen grab of Browne’s tweet (h/t lowkickmma). 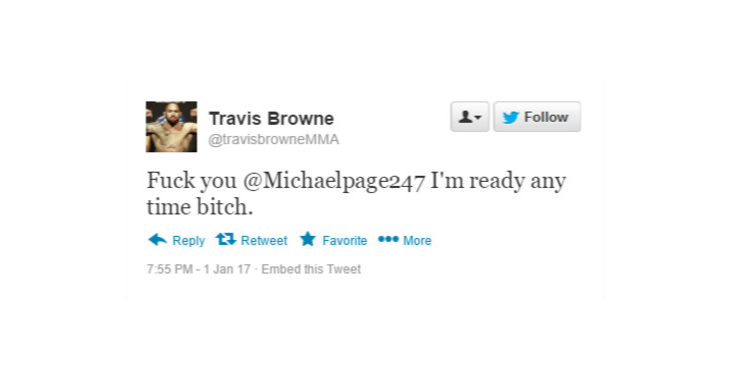 Rousey and Browne have been dating for a while now and the relationship is a serious one. Rousey told ESPN prior to UFC 207 that she is looking forward to the day that she and Browne have a family and envisions them in a quiet home in Idaho or Alaska with an animal sanctuary.

What do you think of Michael “Venom” Page and with his social media posts? Whatever his reason is for kicking the former UFC women’s bantamweight champion while she is down is not really clear, but one thing for sure is that Travis Browne and Ronda Rousey won’t be smiling if they ever run into Michael Page.