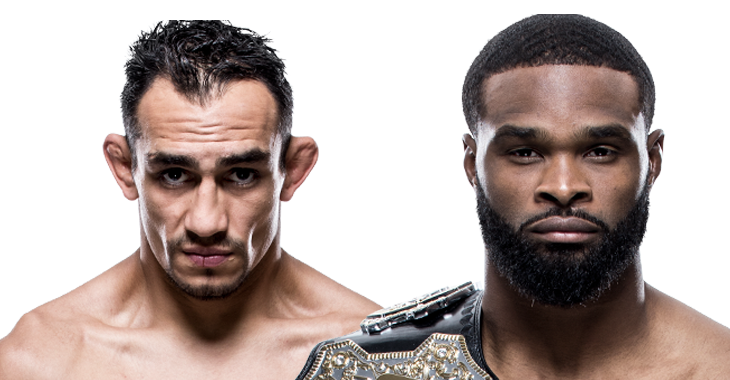 Tony Ferguson looks to be taking a page out of Conor McGregor’s book and ruffling the feathers of UFC welterweight champion Tyron Woodley ahead of his UFC 209 interim lightweight title fight against Khabib Nurmagomedov taking place this weekend.

On a UFC 209 media conference call, Ferguson stated that the interim title fight between Nurmagomedov and himself should be the main event of UFC 209 instead of the UFC welterweight title fight rematch between Woodley and Stephen Thompson. Woodley followed up and stated that the reason he and Thompson were the main event is because he is the undisputed UFC welterweight champion.

“El Cucuy” was asked what he thought about Woodley’s response and had a little more heat to throw at “The Chosen One.”

“I heard he fired back, but you know what? He better watch out because I won The Ultimate Fighter at 170,” Ferguson said at the UFC 209 open workouts on Wednesday (transcribed by MMA Fighting).

Ferguson won his welterweight season of The Ultimate Fighter but moved down to 155 where he will now be fighting for the interim lightweight title. With the featherweight division and welterweight division surrounding him at lightweight, “El Cucuy” says as long as the right champions are in place at 145 and 170, he will be content with being the ruler of 155.

“You’ve got a good guy in Stephen ‘Wonderboy’ Thompson that’s at 170. So you know what? The torch needs to be held by somebody that’s great,” Ferguson said. “Because champions are made in the dark, baby. We don’t need the lights and the spotlight. That stuff is for everybody else, man. But the people who are holding onto the torches — you’ve got Max Holloway at 145. I’m like, that’s cool, man. That’s in good hands right now. I don’t need to go to that weight class.

“One-seventy, we’re going to have ‘Wonderboy’ Thompson beat the f**k out of T-Woodley. You know what, I’ll say that again; I hope they have a good fight, and I hope ‘Wonderboy’ wins. So that’s at 170. If that torch is held by ‘Wonderboy,’ that’s cool, I don’t have to go to 170. Because where I’m from, we got weight classes, baby, and we respect that.

Will Tony Ferguson be able to carry the championship torch at lightweight with a win over the undefeated Khabib Nurmagomedov and then topple Conor McGregor in a title unification bout? Sound off in the comment section!