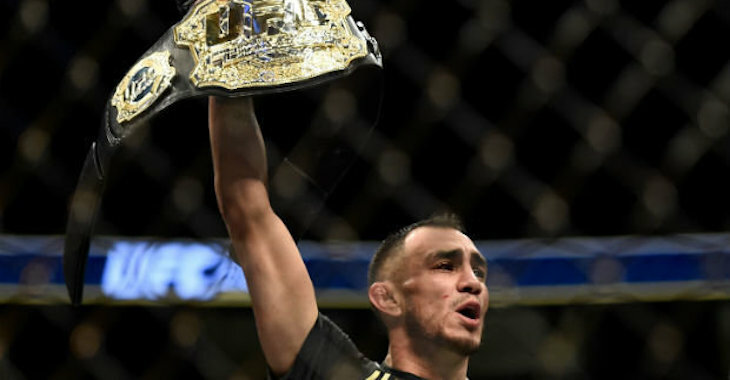 What’s it like to be Tony Ferguson? Only one man knows. There have been ups and downs and a lot of time to contemplate since his win over Kevin Lee, awarding him a UFC interim lightweight title. Once again he’s been booked against Khabib Nurmagomedov, but the fate of his title is a mystery all seemingly waiting on the go ahead from someone he can’t — nor anyone else for that matter — control: Conor McGregor. Is it and interim title defense? Is it for the undisputed? It’s something that left Ferguson frustrated. On the heels of all of that, he just dropped a statement on his Instagram.

“The Champ Says; A response to my future fighter’s: From a normal man’s stand you will be criticized, Looked at different, and told what you are doing is a waste of time. Kid, haters are everywhere. All Shapes, and sizes. They will fuel your fire and that will guide you where you want to go when channeled right. Let’s re-calibrate. Take a good look. Hard work, motherf-ckers. I had to earn it every step of the way. No Complaints. It’s not easy. You have to train to the point where giving up is not an option [on the] mat, [in the] ring, cage and life.”

.@TonyFergusonXT on confusing title situation at lightweight: “It bothers the sh*t out of me, straight up. I’m the f*cking champ and we don’t know if we’re fighting for the real belt of not. What the f*ck is that?” Watch #TheMMAHour live: https://t.co/11sYrEm5Ug pic.twitter.com/uik6wiohr3

“Be ready to turn away anyone not doing what you are doing. If I listened to any of the doubters or naysayers, I might be where they are at right now. Remember, highs and lows kid. Bumps and bruises, Cut and breaks, Stitches and sprains. They all balance out. God has a plan and Jesus is great. Keep the inner circle close and have faith. Trust the process. This sport/martial arts is for those that don’t know it’s for them. If you have to ask after a grueling day, ‘How do I know this is right for me?’ There’s your answer. Coach Cucuy says: “Pick your ass back up, dust yourself off and get back in there. Let’s get that W, kid. See you in the big leagues. To my fighters around the world who inboxed me, keep it up.” — Tony Ferguson via his official Instagram.

It reads like advice for all fighters, specifically some that may have messaged or commented on Tony Ferguson’s social media asking for advice. However, it also reads like advice for himself. The champ being his own coach. It also makes sense giving Tony Ferguson’s unorthodox training procedures of isolation in Big Bear, inside a camp he builds himself from scratch. Ignoring the distraction of the title and focusing on the dangerous threat of Khabib Nurmagomedov in his most high profile fight to date maybe required some re-calibration. …And maybe some self-encouragement. ‘Let’s get that W, kid.’