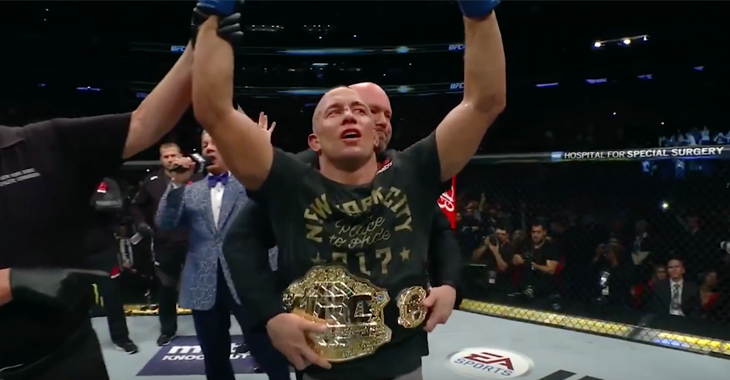 Georges St-Pierre came, he saw, he conquered. The welterweight legend came back after four years removed from competition in the UFC and didn’t skip a beat. He looked amazing as he fought middleweight champion Michael Bisping and submitted him, capturing a title in a higher weight division. Understandably, fans were surprised and devastated to find out he compromised his health for the accomplishment, would vacate the belt and take yet another break from the sport. All eyes are on St-Pierre to return this year, perhaps at welterweight, but his coach doesn’t think that’s going to happen.

“I honestly don’t bother [Georges St-Pierre] about [the next fight], because I know everybody is always asking him about it 24 hurs a day. When I see him, I don’t talk about the next fight. We don’t talk about it. I know what he’s thinking, he knows what I’m thinking and that’s it. We just leave it at that. Personally, I think he’ll fight again.He doesn’t know, nobody knows, but I think he’s just so hyper-competitive that eventually he’s going to wake up one day and he’s going to be like, ‘I need something. I need a challenge.'”

“I just think that’s the kind of person he is [to keep challenging himself]. That’s how I see him. So, we’ll just have to wait and see. I don’t know [if it will be middleweight or welterweight]. That’s just too hard to say. I have no idea [how long he’ll be out]. I think he’s out at least out for a year or two. He’s out for at least a year or two. We all love Georges, but he’s put in so many years, so many bouts, I don’t think it’s fair to ask him for more.” — Coach Firas Zahabi speaking to Fight Hub TV.

Regardless of how bad we want Georges St-Pierre in the Octagon again, his health is the number one priority. Not only that, but it’s hard to think of a better way to cap off his incredible career. After already coming back out of nowhere and winning the middleweight title, there is hardly another step up. Even going back down and beating Tyron Woodley to recapture the belt just to give it back up again, doesn’t seem to have the same luster as what he just accomplished. Either way, if we have to wait or if he retires once again, St-Pierre deserves to be able to do whatever he wants.