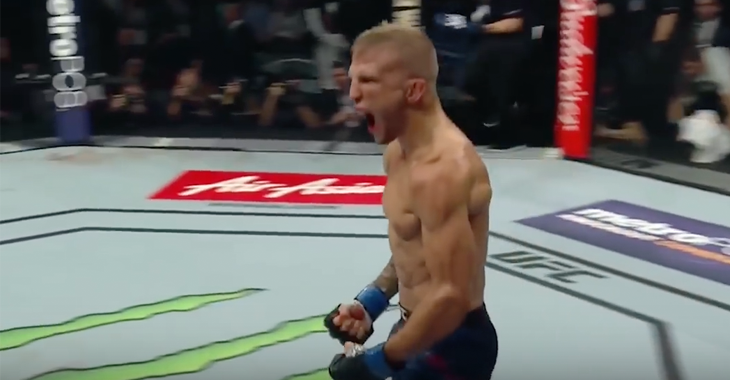 Even after all of the trash talk between Cody Garbrandt and TJ Dillashaw, the former friends and teammates were able to shake hands after their UFC 217 title fight.

It was a close fight where Garbrandt could have possibly gotten the finish in the first round if there was a bit more time on the clock, dropping Dillashaw in the last seconds of the opening round. However, Dillashaw recovered well and dropped Garbradnt twice in the second round and got the finish. Immediately after the fight was stopped, emotions erupted as TJ screamed right in Cody’s face after getting up from the canvas. Dillashaw’s corner also blew up celebrating the win, which included some taunting from TJ’s brother that led to Garbrandt exchanging a few heated words with Dillashaw’s corner.

“My brother’s in my corner, and like I said, he’s been very offended by some of the things and accusations, and the way that some of my really good friends — that I thought were — have treated me,” Dillashaw said during the post-fight press conference (transcribed by Shaun Al-Shatti for MMA Fighting). “And he’s an emotional guy. He loves me more than anybody I know, and he was just backing me. All he said was, ‘What?!’ And we know Cody’s a hot-head as well, and so he went after him, then he had to get escorted. Escorted from MSG — that’s another one to put on the bucket list, I guess.”

Thoughts on the emotional exchange between Cody Garbrandt and TJ Dillashaw’s brother immediately after the fight was stopped? Let’s discuss this one in the comment section!