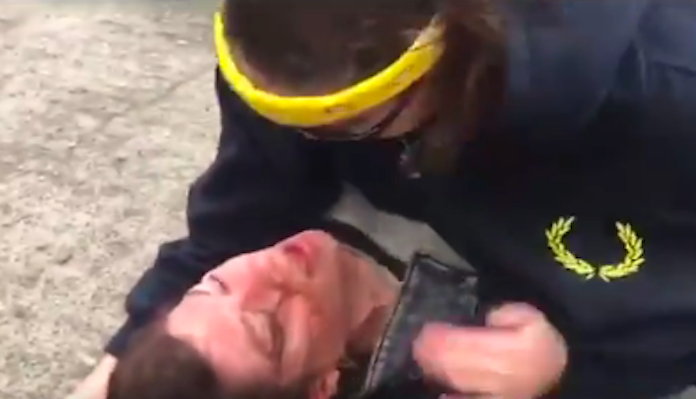 MMA veteran Tara LaRosa took down and restrained a protester at a flag waiving gathering in Portland over the weekend. The protester was allegedly being aggressive with others at the event.

The incident was captured on video by The Post Millennial reporter Andy Ngo, who also shared LaRosa’s account of what happened.

“At flag-waving rally in Portland, [Tara LaRosa] says she had to take anti-Trump protester to the ground after the woman allegedly attacked another woman. The group detained the self-described professor until police came. LaRosa says the woman bit her chest, causing an open wound.” – Andy Ngo on Twitter.

Speaking on her personal Twitter account, LaRosa defended her decision to restrain the woman in question, explaining that she was attempting to help keep everybody involved safe.

“So, let me get this straight… I break up a fight, saving one of their people from taking serious damage… And Antifa tries to deplatform me from yet another site? Awesome” – Tara LaRosa on Twitter.

LaRosa has not fought since 2015, when she defeated Katie Howard by decision. This win was preceded by four-straight losses at the hands of Roxanne Modafferi, Rin Nakai, Sarah Moras and Vanessa Porto. She holds previous wins over the likes of Alexis Davis, Shayna Baszler, Julie Kedzie, and Modafferi. She is the first and only BodogFight women’s bantamweight champion.

What do you think of Tara LaRosa’s decision to restrain this protester? Join the conversation in the comments section down below.